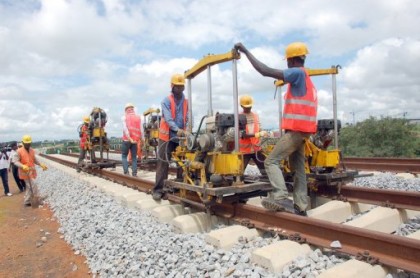 Construction workers of CCECC working of the Standard Guage Rail Network connecting Abuja to Kaduna. Trains on this route will be capable of 150km/hr, capable of reaching Kaduna before any vehicle

With Nigeria’s Minister of Transport Idris Umar tightening the last screw of the rail track at a well-attended ceremony, the first standard rail road project of the Chinese firm in Nigeria and the entire West Africa is formally complete for public use, CRCC said. 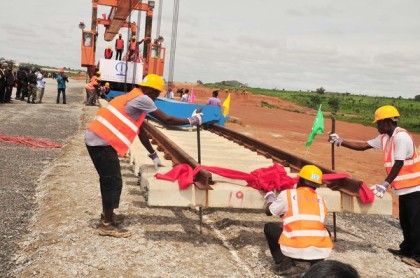 Constructed in three years, the rail road project gulped nearly 850 million U.S dollars and lasts 186.5 km with nine stations and a design speed of 150 km per hour.
Umar, while expressing satisfaction on the project on behalf the Nigerian government and people of Africa’s most populous country, described the project as a significant milestone in the history of Nigeria, as well as a testimony that the transformation agenda of the government was yielding fruitful results.

“I am delighted to be here to perform yet another milestone of the Nigerian railway modernization project,” Umar said, noting it will ease the mass movement of people from the Nigerian capital city to the northwestern state of Kaduna. 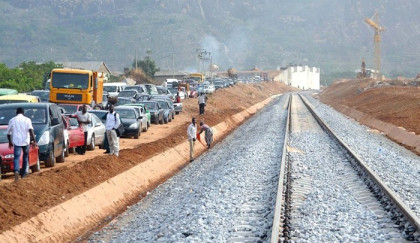 Photos from a Railway link in Kaduna

“We are committed to carry out a lot of modernization projects to make transportation easier for all Nigerians,” the official added.
Shi Hongbing, managing director of the Nigerian office of China Civil Engineering Construction Corporation (CCECC), an offshoot of CRCC, said the company would take part in the running and management of the train in the future.

“With the completion of the track laying, it shows we are competent,” the CCECC top manager in Nigeria said.
“I want to thank all the people who helped us during the construction,” he added, acknowledging, especially, the cooperation and hospitable nature of people of the local communities which the rail project passed through.

“The completion of the rail road is a guarantee for the running of the rail road next year. It will boost the confidence of the Chinese firm and also the determination of Nigeria. And this is a good example of the coast rail road project of the West African country,” said Chairman of CRCC Meng Fengchao in a message sent from Beijing, capital of China.

Earlier, Cao Baogang, vice chairman of CRCCCAC, described the project as a “miracle”, noting it was completed “under the pressure of Ebola and the security problem in Nigeria.”
The Abuja-Kaduna rail line is one of the first Standard Gauge Railway Modernization Projects (SGRMP) undertaken in Nigeria. The railway modernization initiative in Nigeria aims at replacing the existing narrow gauge system with the wider standard gauge system, while allowing high-speed train operations on the railway network. 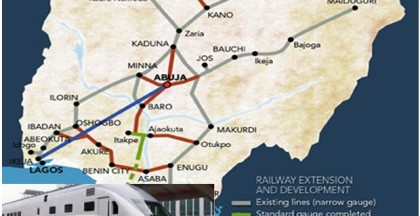 The Nigerian Railway Corporation traces its history to the year 1898, when the first railroad in Nigeria was constructed by the British colonial government. On October 3, 1912 the Lagos Government Railway and the Baro-Kano Railway were amalgamated, starting nationwide rail service under the name Government Department of Railways. With the passing of the Nigerian Railway Corporation Act of 1955, the company gained its current name as well as the exclusive legal right to construct and operate rail service in Nigeria. 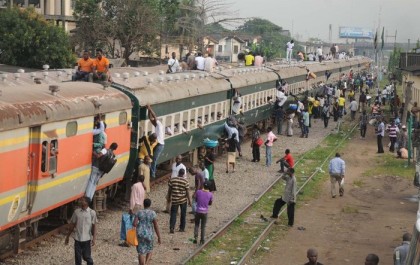 Passengers trying to get on a train in Lagos, Nigeria

The rail network reached its maximum extent shortly after Nigerian independence, in 1964. Shortly after that, the NRC entered a long period of decline, inept management, and eventually a complete lack of maintenance of rail and locomotive assets. In 1988, NRC declared bankruptcy, and all rail traffic stopped for six months. After that, trains resumed, where the tracks were usable. By 2002, passenger service was again discontinued altogether. Starting in 2006, plans were made to restore the rail lines and add new locomotives with foreign assistance. In December 2012 regular, scheduled passenger service was restored on the Lagos to Kano line.