In line with its mandate, the National Orientation Agency, (NOA) in conjunction with the National Emergency Management Agency (NEMA) has advised communities living along riverine areas that are prone to flooding to adhere to early warning signals and relocate from the river banks in order to save lives and properties.

The Director – General of NOA, Mike Omeri gave this advice during a Public Enlightenment/ Sensitization programme of communities in flood prone areas in Kontonkarfe, Kogi State.
Omeri said that the repetition of sensitization in flood prone areas was to stop the reoccurrence of the 2012 flood disaster and to work with communities affected to cultivate good sanitation habit to make ways for water to flow freely.
He reiterated the government’s concern for the welfare of citizens, urging the people to cultivate attitudes that promote government’s initiatives, adding that government was concerned on the youth, who are the engine of development. 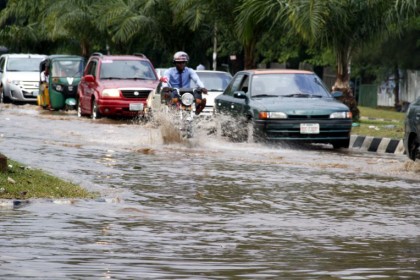 In his word: “We must do the right thing always, not only when it affect us directly but for the benefit of the environment in which we find ourselves and for our fellow citizens, for the development and progress of our country”.

Director General NEMA, Mohammed Sani Sidi represented by Samuel Bitrus said that flooding has become a perennial occurrence in Nigeria which always brings about the displacement of people from settlements thereby disrupting the functioning of the community. He listed the effects of flooding to include, loss of farmland, damage to property and exposure to diseases in extreme situations.
Sidi said that for every disaster, the community is the theater of events hence, communities must take responsibility for their safety and that of their property and the environment. He noted traditional institutions have a significant role to play in mobilizing their communities by encouraging participation in flood preparedness.
In his remark, Kogi State Governor, Idris Wada represented by the Special Assistant on Ecological Matters, Air Vice Marshall Gabriel Abdul (rtd) said that the Government of Kogi State has  been prompt in responding to the affected communities as various measures have been taken to reduce and mitigate the negative effects of the flood.
Wada urged all well meaning Nigerians, cooperate organizations and the international community to partner with governments at all levels to come to the aid of flood victims in the State and also assist to find a lasting solution to the issue of flooding and other environmental issues.
The Ohimege, Igu Kotonkarfe, Abdulrasaq Koto said that flooding has become a reoccurring experience in the area making life difficult for residents because the major occupation of the people, which is farming, has been disrupted.
The royal father appealed to the Government to assist the farmers and put measures in place to encourage them go back to their farmlands for dry season farming in the aftermath of the flood. He also advocated the proper dredging of the River Niger which, he said, would help protect the environment.