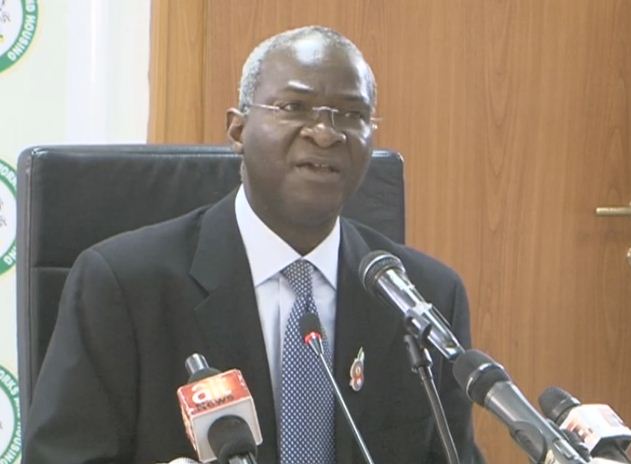 Minister of Power, Works and Housing, Mr. Babatunde Fashola, has outlined the Federal Government’s strategic plan on infrastructural development for the nation in the the three sectors.

The Minister stated this while briefing the press on the plan. He noted that a large percentage of the difference in the proposed 2016 budget would go to capital projects.

Speaking on the Power, Fashola said the economic prospects of Nigeria’s Power Sector has been projected to surpass that of Telecommunications if its privatization programme is diligently implemented.

He said his quest is to stabilize the electric city market in Nigeria through consolidating the privatization the Power Sector to restore and sustain investors confidence, fully implement the media tariff order, prepaid metering among others, but first he says electricity consumers must clear up accumulated bills and ensure the pay for what the consume hence fort. He urged Government establishments to pay-up outstanding electricity bills.

He also reiterated that government must ensure that it provides gas and expand the transmission network. He said the ministry of petroleum had indicated interest to build pipelines to transport gas to power plants that would add another 2,000 mw to power stock within 12-15 months.

With the nation’s current dwindling economy and less than six Billion Naira as capital budgetary provision for roads infrastructure, the Minister said the Ministry will focus on its two hundred ongoing projects.

Fashola said attention will be paid to the nation’s 36,000 Km Federal road network, with emphasis on those that bear heavy traffic and also link states.

Though these roads only form 16 percent of the nation’s 200,000 Km roads network that comprises those of states and local governments. These routes he said, carry 70 percent of the total nation’s traffic.

The last time the road infrastructure received a favourable budget  re-provision, he noted with dismay, was in 2002 when the sector was allocated 200 Billion Naira as against 6 billion of the year under review.

On the second Niger Project, Fashola noted that efforts are ongoing to settle outstanding compensation for effective acquisition of right of way.

Also speaking on the strategies to address housing deficit and provision in the country, the minister stated that the immediate priority of government was to review the National Housing Policies.

He said that government would lead the aggressive intervention to increase supply by undertaking construction of public sector participation and ownership with a view to reducing the current housing deficit put at 17 million units.

The Minister said that the country’s national housing budget must be review from the current N1.8bn to hundreds of billions if it must meet its housing needs.

NEWER POSTMinister of Labour, Ngige Solicits ILO For Strategic Rehabilitation of IDPs
OLDER POSTDonald Trump Said Muslims Should Be Ban From US, Today Over 100,000 Petition Trump To Be Ban From Uk