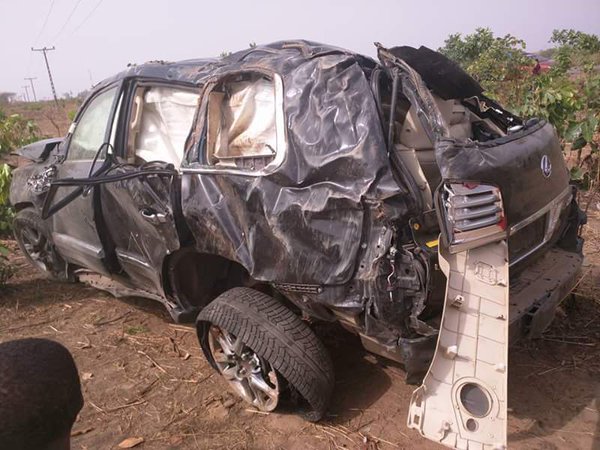 The Federal Road Safety Corps (FRSC) investigation revealed that the road crash that cuased the death of the Minister for Labour and Productivity, Late James Ocholi was as a result of over speeding, tyre bust and sudden application of break in a panic situation.

The accident occurred along the Kaduna-Abuja expressway near Rijana village, on Sunday.

The Corps Marshal of FRSC, Boboye Oyeyemi, read the report on Wednesday during a valedictory session of the Federal Executive Council in honour of the late Minister at the Council Chambers of the Presidential Villa, Abuja.

“There were 10 persons involved in the accident and 9 were adults. The minister and his son died on the spot, while his wife died at the hospital. The driver of the crashed vehicle was moving at excess of the stipulated speed when he had a tyre burst.”

“The investigation team gathered that the driver of the backup vehicle had noticed that the minister’s vehicle rear left tyre was under-inflated, and availability of radio communication deprived him of access to the minister’s driver,” He said.

Oyeyemi said that the Minister’s driver, Taiwo James Eleghede, has no record of valid driver’s license in the National drivers’ database.

“The ejection of the minister and his son, who occupied rear seats confirmed the fact that their rear seat belts were not in use and on the contrary the driver and the orderly survived because the front seat belts were used.” He added.

The Corp Marshal said that although there exists a pothole at the crash vicinity, its existence and the road recondition were not contributory factors.

He said the crashed vehicle driver was driving too fast and slammed on the break so hard.

“These two factors materially contributed to the inability of the driver to maintain control when the left rear tyre bust.”

In conlcusion, Oyeyemi said that the inability of the driver to maintain control of the vehicle when the tyre bust led to the fatal accident.