FG to begin repairs of federal roads, appeals to road users on Apapa/Oshodi expressway to be patient 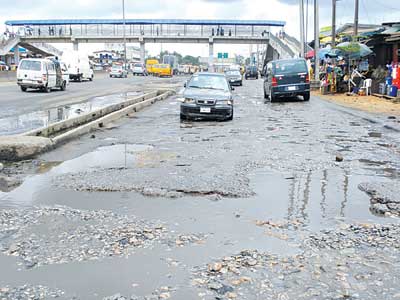 The Federal Controller of Works, Lagos, Mr Godwin Eke, said on Sunday that the Federal Government was set to begin rehabilitation of the Apapa-Oshodi Expressway and other federal roads in Lagos.

Eke told newsmen while inspecting the highway that construction giant Julius Berger had submitted cost estimates for the repairs of the Ilasamaja/Berliet/Iyana Itire sections of the Apapa/Oshodi expressway.

He, however, said that the Federal Ministry of Works was waiting for approval of the 2016 budget, to begin the repairs.

Eke said that the site inspection became necessary, “to assess the current situation of the highway’’.

The Controller expressed sadness over the failed portions and apologised to road users on behalf of the federal government, stating that all failed sections will receive priority attention.

He appealed to road users on the Apapa-Oshodi expressway to be patient, adding that government was pained by the hardship faced by motorists due to the bad portions.

Eke said that government was also set to begin the rehabilitation of all federal roads across the country.

“The Ilasamaja/Berliet/Iyana Itire sections of this Apapa-Oshodi expressway are in deplorable condition.

“We have made some proposals and designs on how to fix the highway and other federal roads in Lagos, but it is tied to the 2016, 2017 and the 2018 budgets.

“The Minister, Mr Babatunde Fashola (SAN), has given his word that the Apapa/Oshodi expressway and all other federal roads in Lagos and throughout the federation will be fixed soon.

“We are assuring the public that as soon as the budget is passed, we will mobilise the contractors to site to begin repairs on these critical sections, that is, the Ilasamaja/Berliet/Iyana Itire sections,’’ he said.