President Muhammadu Buhari has assured Nigerians that he would do everything necessary to secure oil facilities and other government assets in the Niger Delta region. 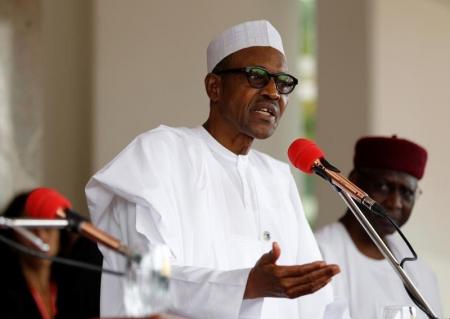 NAN(Abuja): The president gave the assurance during the democracy day lecture organised on Tuesday in Abuja by the Save Democracy Group Africa, to mark the 2016 democracy day.

The theme of the lecture is, the Change Agenda and Sustenance of Nigerian Democracy.

The President was represented by Secretary to Government of the Federation Babachir David Lawal
He said while his government would not shy away from finding non-military solution to the vandalism and destruction of oil facilities in the country, it would not succumb to intimidation and blackmail by any criminal element.

“You will agree with me that two major reasons why our economy is in such a deplorable condition is the slump in crude oil prices.

“It is also due to decline in production as a result of the recent upsurge in activities of criminals and saboteurs in the oil producing region.

“While the control of the selling price of our crude oil is not solely in our hands, the challenge of militancy, criminality and vandalism is solely within our control.

“I therefore wish to restate that I have directed all the nation’s security outfits to take all steps necessary to secure the oil facilities and other government assets in the Niger Delta region.

“While our doors are open to dialogue, political and non-military solution on the matter, this government will not succumb to intimidation and blackmail by criminal element, coming to inflict further unnecessary social and economic hardship on the citizens.’’

He urged the perpetrators to desist from the act or face the consequences.
On insecurity in the North East as well as herdsmen and farmers clashes across the country, the President assured that it would not rest on its oars in finding lasting solution to the problems.

“ In the area of insecurity, I can gladly report that the government has recovered territories hitherto under the control of insurgency in the North East.

“What remains is the ongoing military campaign to mop up pockets of insurgents scattered in forests and mountains of the region.

“In the meantime government has started resettling the returning internally displaced persons to their original localities.

“The challenging task of rebuilding the region will start in earnest with the implementation of the 2016 Budget of Change.

“As to the rampant cattle-herdsmen clashes across the country, the Federal Government is partnering with state governments to find a lasting solution to the unfortunate menace.

“Among the solution being considered is the establishment of animal grazing reserve and other policies targeted at encouraging the nomad herdsmen to adopt modern methods of animal rearing.

“In the meantime, I have directed all security agencies to bring all perpetrators of the clashes to book. I wish to assure all Nigerians that there will be no sacred cows,’’ he said.
He commended the electorate for voting the All Progressives Congress (APC) into power, assuring that his government would continue to work in their interest.

“I can say unequivocally that the electorate made the right choice at the right time considering that this government came into power at the very brink of the collapse of our economy.

“Then for 16 years the nation was charaterised by flagrant misrule and impunity, resulting in unimaginable corruption, insecurity, massive unemployment, and economic meltdown.

“In order to arrest the slide into total social and economic chaos, this government has to take very difficult and painful decisions.

“Decisions required putting the nation back into the path of good governance by the rule of law.

“Restoring hope and security among its citizens and providing a sustainable and enduring environment for employment and economic growth.

The guest lecturer, Prof. Ibrahim Gamabari, called for concerted effort to corruption and other vices that had affected development of the country.