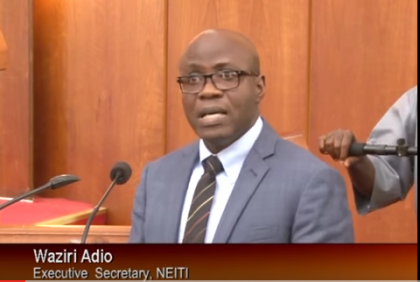 The Senate has constituted an Adhoc Committee to investigate the fraud and anomalies uncovered by the 2013 audit report of the Nigerian Extractive Industries Transparency Initiative, NEITI.

The resolution followed a briefing by the Executive Secretary of the Agency, Waziri Adio.

The senate resolved into committee of the whole and suspended its rules to allow the executive secretary of NEITI, Waziri Adio into the chamber to brief the senators on the 2013 audit report of the extractive industries in Nigeria.
As part of  his submission, Mr Waziri Adio said ,

“There are some monies that were withheld or lost or underpaid for different reasons. These monies are in three tranches. The first one is in the category of the unremitted, and the unremitted amounted to $3.8 billion and N358 billion”

The seven-member Adhoc committee constituted has has Senator Barau Jibrin, Chairman Senate committee on Petroleum(Downstream) as chairman. Other members of the committee are mostly chairmen of senate standing committees.
The terms of reference of the committee as read out by the senate president , Bukola Saraki includes,

“To re-examine the financial processes and fiscal audit report of the NEITI, the financial loss and leakages to government in all it’s ramifications, remedial measures and sanctions where necessary and more importantly, any relevant legislative action that would be required to block off all forms of leakages”

The Ad-hoc committee is expected to conduct an investigative public hearing where all indicted persons and agencies are expected to appear to defend their actions.