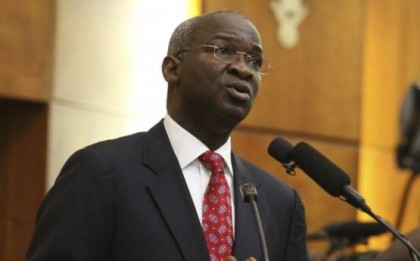 Hakeem Bello(Abuja): As part of efforts to achieve the roadmap to incremental, steady and eventual uninterrupted power supply as well as address the current vulnerability of the system, the Federal Government plans to increase the store of gas in various parts of the country, especially in the Eastern region and Western Axis in order to ensure supply to the gas-powered electricity generating plants across the country, Minister of Power, Works and Housing, Mr. Babatunde Fashola SAN has said.

Fashola, who was responding to questions following his presentation at the weekend at the Merit House venue of the inaugural edition of The Podium- A Town Hall Forum organized by the Kukah Centre in the FIXING NIGERIA series, said the process was already going on in some parts of the country adding that the idea was to ensure more regular supply of the commodity to the plants which supply over 70 percent of the country’s electricity.

Electricity supply across the country through the 23 out of the 26 Power Plants being powered by gas, has been affected in recent time by militants in the oil producing region of the Niger Delta who have been sabotaging the gas pipelines that convey the commodity to the Power plants located in various parts of the country.

Fielding questions during the robust interactive sessions involving a four-member group of discussants, Private Sector Operators, Civil Society groups, journalists and Politicians, the Minister, who said progress was being made along that line, also revealed that government was  articulating the process of substantially reducing the debts it inherited from the government agencies in the last administration to the Power operators adding that the Debt Management Office (DMO) has been notified of the intention of Government in that direction while substantial payments would be made before the end of the year.

Government, according to the Minister, is also reviewing applications by some states on ownership of roads with a view to ceding such Federal roads to the states where such roads have become township roads citing Ikorodu Road, which runs across Mainland Lagos as an example of a road that was handed to Lagos State by a previous administration.

On the plan to increase gas storage in various parts of the country, Fashola said the success of the venture to boost electricity supply would, however, depend on Nigerians who, according to him, “must take ownership of the pipelines and secure them as a collectively owned public utility”.

The Minister who was responding to a question on what the Federal Government was doing to protect the gas pipelines, expressed dismay at the on-going vandalism of oil pipelines in the Niger Delta region, wondering why some citizens would engage themselves in destroying a public utility built for their use adding, “I don’t know of any nation which has to protect gas pipelines built in people’s interest”.

“Why should we not take it for granted that it is collectively owned“, the Minister asked adding that unless Nigerians elevate themselves culturally to accept the fact that anything that was public utility was a matter of collective ownership and trust on every citizen and anyone who tampered with it tampered with the rest of Nigerians.

“We must find another way to ventilate our anger. It doesn’t make sense to me that government or indeed somebody else must be paying somebody to look after a facility built in his interest”, the Minister said.

On payment of debts owed the power sector operators, the Minister who recalled that the various departments and agencies of government, including the Ministry of Defence, have been notified of the intention, expressed the hope that the debt would be substantially wound down before the end of the year. “We must lead by example as a government. If we ask people to pay there bills, then we must pay what we owe”, he said.

He disclosed that the Power, Works and Housing Ministry was now focusing on increasing transmission of power through the Kaduna-Kano-Katsina-Calabar-Ikot Ekpene transmission line saying the line would be included among some of the transmission lines to be concluded this year.

According to him, repairs on the collapsed Ugwuanyi transmission line would be completed in August this year to add additional 1,000MW to the National Grid adding that in terms of the system collapses that had occurred, they were largely triggered off by shortage of power supply to the systems in order to avoid damage to it.

Also fielding questions on the Housing sector, Fashola, who said the Ministry was rounding off work on national housing design that would reflect the cultural preferences of various parts, noted that the role of Government was to catalyze the process by providing the enabling environment such as land and other public utilities like roads adding that government had also the responsibility to stabilize the process then hand over to the private sector to drive it.

The Minister said what Government intends to achieve first was some sort of standardization because, according to him, “when you talk of mass, what you mean is that we must produce in multiple volumes and the only way to do that is to achieve some sort of uniformity that allows for automation otherwise there will be no economy of scale”.

According to him, such things to be standardized include doors and window sizes, ”and those other things that fit into house designs” adding that whether they are duplexes, bungalows or flats, those fittings would speak to predictability so that they could be produced on mass scale by industries that produce them.

Citing the automobile industry where the components are standardized and produce by different companies, Fashola said, “Those are the kind of standardizations that we want to see in housing so that those who are producing the items will have jobs. Once we have that standard that is where we are going. We want to prove concept and once concept is proven we can create a mechanism to maintain sustainability”.

“We can say now that all the monies that we are no longer spending, such as subsidies that we are now saving from not importing some commodities, let’s spend it on housing because it has enormous capacity to drive goals for our society, for builders, artisans, suppliers right up to the end of the value chain which is furnishing – curtains, household items etc. It is a key driver for economic growth”, he said.

He reiterated the desire of the government to target the low income group of Nigerians, whom he noted were in the majority and were the vulnerable group adding that the plan of government was to “commit them to our housing ladder” which, according to him include the Mortgage system and Rent-and-Own.

Describing the prevailing practice of collecting rent in advance as retrogressive, Fashola said such practice never benefitted the society and the country as the people paying the rents receive their salaries in arrears adding that the situation would increase corruption as the money used to pay the advance rent had move from somewhere and must be adjusted.

As to whether or not it is possible for government to build houses for every citizen, the Minister, who noted that the possibility lay in knowing the true population of the country, said such a venture, if possible, would come with a cost some of which according to him include losing private ownership of land and government’s right to control the birth rate among families.

Speaking earlier on the topic “Fixing Nigeria”, Fashola, who wondered whether it is Nigeria or Nigerians that need fixing cited the example of what is currently happening in the Niger Delta where Nigerians are destroying public utilities built for their use adding that to fix the country successfully, Nigerians must elevate themselves culturally to the position of seeing public utilities as collectively owned and take protection of such for granted instead of venting their anger on such utilities each time they had issues.

Earlier in his welcome address, Bishop Mathew Kukah said Fixing Nigeria was a signature project of the Kukah Centre that strove to provide a platform for engagement between public officers and citizens adding that the importance of robust debates could never be overemphasized in a democracy.

He said, through the initiative the Centre hoped to “elevate the quality of political discourse in the country by generating ideas through robust and informed engagement between public officials and citizens and in the process deepen our nascent democracy”.

Those present at the well-attended occasion included captains of industry, Private and Public sector operators, members of the academia and Civil Society organizations, Church leaders, Politicians among many other distinguished Nigerians and foreign diplomats.