FG Committed To The Completion Of The 2nd Niger Bridge – Fashola 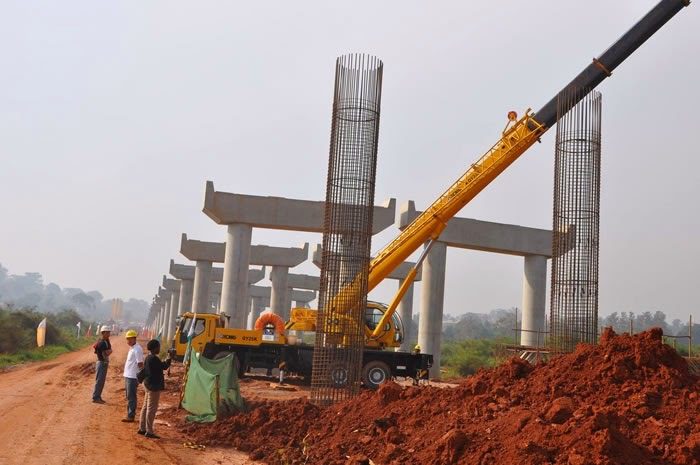 The Minister of Power, Works and Housing, Mr Babatunde Fashola, says the Federal Government is committed to completing the second Niger Bridge and Zik’s Mausoleum.

Fashola gave the assurance on Monday when he visited Onitsha, the commercial city of Anambra, to inspect the progress of work on the second Niger Bridge and other major projects.

The minister said when completed, the bridge would bring an improvement and accelerate the economic prosperity, transportation and exchange of goods and services across the country.

“I came here in pursuant of the commitment of the Federal Government and that of President Muhammadu Buhari to complete the bridge.

“It will give relief to the first Niger Bridge and also help in ensuring that it is now kept in a good state of repair and maintenance.”

Fashola said that the Federal Government would compensate appropriate land owners and ensure that the Environmental Impact Assessment (EIA) was taken care of.

According to him, the bridge is the Federal Government’s first measure towards a Public Private Partnership with some investors.

The minister also described the project as one of the largest infrastructural work being embarked upon by the Federal Government.

Fashola called for commitment on the part of host communities and urged them not to interrupt the progress of the project or engage in hostilities.

He urged them to dialogue with the government as work was in progress in the larger interest of the country.

On the late Nnamdi Azikiwe’s mausoleum in Onitsha, the minister said that the abandoned project would be completed, adding that it was one little way to appreciate those who had served the country.

In his remarks, Gov. Willie Obiano of Anambra stressed the importance of the second Niger Bridge and expressed the hope that the project would be completed in good time.

Obiano commended the Federal Government for refunding about N43.8 billion expended by the state government to reconstruct and rehabilitate some federal roads.

The governor appealed to the Federal Government to consider the completion of the Umunya axis of the Enugu-Onitsha Express Way, to guard against accidents.

Obiano called for the completion of the Nnewi Sub-power station, saying that it would benefit the industrial town and neighbouring Imo communities economically.

“We only ask for fair play and due attention to the host communities’ interest.

“Consultation of community stakeholders have been negligible; we have complained and expressed our concern for compensation.”

He called for the completion of the Zik’s Mausoleum, saying it is a great embarrassment to the country that 20 years after, the project had not been completed.

In a remark, the Division Manager of Julius Berger Nigeria, Mr H.D. Bley, explained that the company had been on site since 2014 and had set up several yards to make the project possible.

He explained that the project was more of road construction than bridge, adding that the road on both sides of Anambra and Delta were 10 kms while the bridge was 1.5 kms.

Bley, however, expressed the readiness of the company to move back to site as soon as finance was made available.

The the minister, accompanied by Obiano, some traditional rulers and other state functionaries, later visited the second Niger Bridge and Zik’s Mausoleum.

Other projects visited were the Umunya axis of the Enugu-Onitsha Express Way and the Nkpor Fly-over bridge near Onitsha, among others.