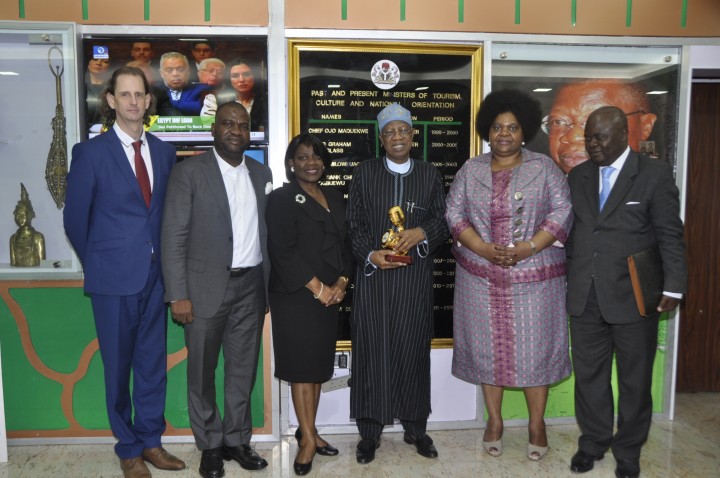 Photo: Minister of Information and Culture, Alhaji Lai Mohammed, with the delegation of AFRIMA who paid him a courtesy call in his office in Abuja Tuesday.

The Minister of Information and Culture, Alhaji Lai Mohammed, has said that the creative industry, which encompasses television, music, film production, advertising, arts and culture, is capable of creating 1 million jobs in the country in the next three years, if properly harnessed.

This was disclosed in a press statement made available to the media by the SA to the Minister of Information and Culture, Segun Adeyemi in Abuja on Tuesday.

The Minister made the assertion when he received a delegation from the African Music Awards (AFRIMA), led by the Head of Culture Department at the African Union Commission (AUC), Ms Angela Martins, in Abuja on Tuesday.

He said the migration from analogue to digital broadcasting, which requires each of the 24 million TV households in the country to have a Set top Box or Smart TV, will create thousands of jobs by the companies licensed to produce the boxes.

Alhaji Mohammed said hundreds of thousands of jobs will also be created from television production for at least 180 state channels, 30 regional channels and at least 10 National channels, catering for local music, news, film, children programming and sports that will be created once the country fully digitizes its broadcasting in 2017. 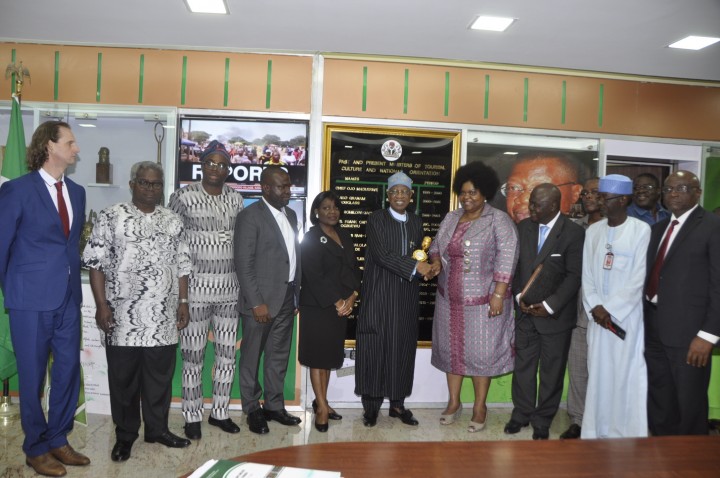 Photo: Minister of Information and Culture, Alhaji Lai Mohammed, with members of the AFRIMA delegation and the chief executives of the NTA, NAN and VON

Other sources of job creation, according to him, are the production of local content; the exponential increase in the production of movies, since Nollywood will move to Push and Subscription Video On Demand on the STB and online; the increase in the number of writers, lighting, sound, camera and editing professionals as well as actors; the need for wholesalers, retailers, electricians, installers to supply the market with STBs, TV sets and dongles; the massive increase in television and online advertising, as well as the need to create Apps to offer goods and services and for interaction and entertainment at every level.

The Minister said the knock-on effect of the booming production business would grow Nigeria’s capacity to meet the quality demand for fully indigenous content creations, which will bring back the millions of dollars currently being exported to South Africa, Europe, USA by Nigerian producers.

”The creative industry has turned around the fortunes of California, India, Turkey, Brazil, United Arab Emirates, Australia, etc and can do the same in Nigeria,” he said. ”The industry can redress the economic malaise of Africa as a whole, and is the panacea to youth unemployment and a tool for unity and peace.”

Alhaji Mohammed said the Ministry of Information and Culture has no option but to support AFRIMA, since part of its (Ministry’s) mandate is to promote and showcase the nation’s culture.

Earlier, the leader of the delegation, Ms. Martins, said the visit was to solicit the Minister’s full support for the 2016 AFRIMA, to be hosted by Lagos State in November.

She said the AU had been partnering with AFRIMA since 2014 because it offers a platform to recognize talents across Africa and also to celebrate African values and culture through music.