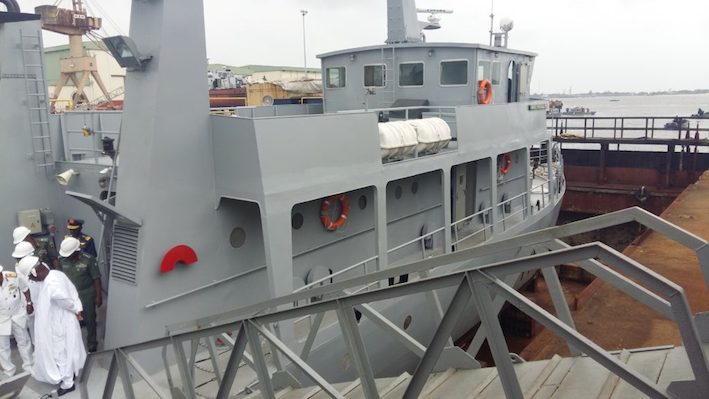 Commissioning of new gunboats of the Nigerian Navy

NAN(Lagos): The Nigerian Navy on Wednesday in Lagos inaugurated 39 gun boats and 45 operational vehicles to assist the fight against criminals and vandals in parts of the country. Thirty of the boats were built in Nigeria.

He said that the thirty 8.2 metre boats, which were constructed for the navy by Epenal Boat Yard in Port Harcourt, would be deployed for rigorous patrols in the Niger Delta while additional 20 would be delivered subsequently … According to the naval chief, the gun boats also benefitted from the incorporation of anti-ballistic protection, giving it edge for more audacious and aggressive employment.

At the inauguration, Minister of State for Defence, Mohammad Dan-Ali, said that the gun boats were fitted with appropriate weapons and anti-ballistic protection to enhance optimal efficiency.

The minister was represented by the Permanent Secretary, Mr Danjuma Sheni.

“The country’s security challenges have continued to demand a great deal of human and material resources to surmount, which in the light of dwindling revenue would be sustainable only with generous innovations and incorporation of home grown solutions,” Dan-Ali said.

He said that the thirty 8.2 metre boats, which were constructed for the navy by Epenal Boat Yard in Port Harcourt, would be deployed for rigorous patrols in the Niger Delta while additional 20 would be delivered subsequently.

“I am hopeful that the boats being launched today would further boost the ongoing patrol efforts in the various rivers and creeks of the country to the immense benefit of the nation’s maritime security,” the minister said.

He thanked President Muhammadu Buhari for his continual support and commitment to the Armed Forces.

The Chief of Naval Staff, Vice Adm. Ibok Ete-Ibas, in his welcome address, said that the Epenal boats were an improvement on 30 others unveiled in Port Harcourt in February.

“These boats no doubt, have boosted navy maritime operations. However, as part of the efforts to continue to achieve unchallenged dominance of our maritime environment, the navy within a space of six months has launched another 39 specially built patrol boats into her fleet.

“These efforts, both then and now, represent navy’s modest contribution to enhance national security and prosperity.

“Of the 39 boats launched, nine were acquired from Sri Lanka and would be greatly helpful for patrol of territorial waters and the contiguous zone,” said the naval chief.

Ete-Ibas said the decision of the navy to build 60 boats locally was part of her resolve to look inwards in the production of the nation’s naval hardware.

“The mounting operational challenges in the face of progressively dwindling economy necessitated the navy to explore more cost saving options through local construction of these patrol boats.

“These boats retained all positive features of the previous set including being fitted with appropriate weapons for credible firepower,” Ete-Ibas said.

According to the naval chief, the gun boats also benefitted from the incorporation of anti-ballistic protection, giving it edge for more audacious and aggressive employment.

“They are also expected to present a better sea-keeping ability with a wide margin for the many corrections applied to the design concept of Lot 1, through series of stage trials in the production cycle.

“I can say we are gradually but steadily moving towards the saturation of the nation’s backwaters with patrol boats for improved security of our maritime domain, Ete-Ibas said, adding that the boats would be deployed optimally by relevant navy units.

The Chairman, Senate Committee on the Navy, Senator Isa Aman-Isa, said the committee was doing everything possible to support the navy in tackling maritime insecurity to the fullest.

Present at the inauguration were the Chief of Defence Staff, Gen. Gabriel Olonisakin and other top brass in the military.