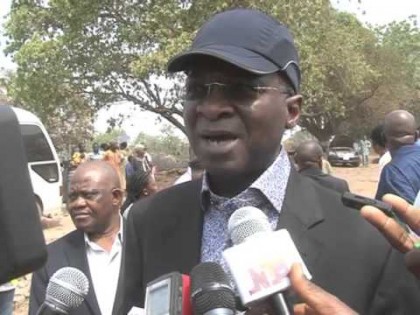 As part of his resolve to physically monitor on-going road projects across the country, the Minister of Power, Works and Housing, Babatunde Raji Fashola, on Wednesday August 24, 2016 inspected progress made on the Ilorin-Jebba road rehabilitation project in Kwara State.

The Minister, who is in Ilorin for the 5th National Council on Lands, Housing and Urban Development, undertook the inspection visit on arrival from the airport, giving credence to the present administration’s determination and commitment towards ensuring that contractors who have been re-mobilized return to site and, most importantly hastens their completion according to specifications.

The 93.6 – kilometre road, which is also part of the Trans-Saharan road network cutting across the West and Northern Africa from Lagos, Nigeria to Algiers, Algeria, is a vital route and one of the busiest within the country as it connects the South- West geopolitical zone to the Northern parts, where goods and services are being transported via articulated vehicles on a daily basis.

The representative of the contractor handling the project, CGC [Nigeria] Ltd, Tian Jiyu, said about 40 kilometre of the road has been completed, while expressing confidence that the remaining portion of the road would be completed within the stipulated 2-year contract period.

The Minister was accompanied on the inspection tour by the Permanent Secretary [Works and Housing], Engr. Abubakar Magaji; Federal Controller of Works, Kwara State, Engr. O. O. Awosanya; Director of Information, Bisi Agbonhin; and other officials of the Ministry.