NAN: The Federal Government has listed two jets in the Presidential fleet for immediate sale.

The two aircrafts,  Falcon 7x and Hawker 4000, were advertised on page 35 of Tuesday’s Thisday Newspapers

The adverts showed the performance and specifications of the jets,  which indicated that they were still in good condition. 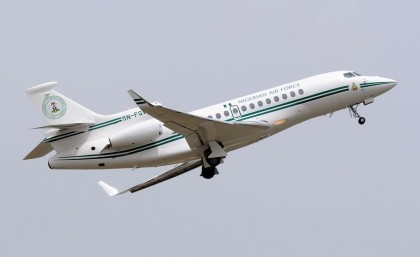 Interested buyers are to inspect the Falcon at the presidential wing of the Nnamdi Azikiwe International, Airport Abuja while the Hawker 4000 would be inspected at Cessna Zurich Citation Service Centre, Zurich, Switzerland.

With selling of the air craft, the number of planes on the presidential fleet will be reduced to nine.

President Muhammadu Buhari as part of his campaign promise pledged to sell off most of the planes on the fleet to save cost.