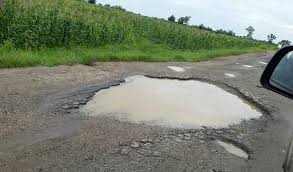 The three Senators representing Niger state in the National Assembly have raised the alarm over the grounding of activities on major federal highways traversing the state as a result of traffic diversion due to dilapidated roads.

At a joint press briefing in the National Assembly complex on Thursday, the senators called on the Minister of Power, Works and Housing, Mr. Babatunde Fashola to urgently repair the Abuja – Minna, Minna – Bida, Kontagora to Yauri, Rijau-Kontahora, Minna-Zungeru-Tegina federal highways where many passengers are currently grounded.

Speaking first was Senator Aliyu Sabi Abdullahi (APC/Niger North) who lamented that motorists were spending between 4 to 5 hours for a journey that should ordinarily last two hours narrated how bad roads along the Kontagora-Makera-Birnin Gwari have led to traffic diversion to the Minna – Suleja federal highway with traffic stretching over five kilometers on the road especially around Lambatta town.

“We are in pains that the federal highways have remained dilapidated for years but the recent development for some weeks now is a cause for concern. Minna and other communities along the highway have all been invaded by traffic diversion. The bad roads also have serious security implications”, Abdullahi who is chairman, Senate Committee on media and public affairs said.

Also speaking at the press briefing, Senator David Umaru (APC/Niger East) complained about the non-completion of the dual carriage highway that has been under construction along the Minna – Abuja highway for years.

Senator Umaru, who is Chairman, Senate Committee on Judiciary, Human Right and Legal Matters said although the road projects are not captured in the 2016 appropriation act, the Works Minister can urgently sort for funds from the ministry’s budget to repair the highways.

The Senators commended President Muhammadu Buhari for his steadfast leadership but said Niger state with over two thousand kilometers of federal highways linking the northern and southern parts of Nigeria deserves urgent attention and lasting solutions to the current traffic gridlock.

Also read: Some Governors And Deputy’s Now Senators or Ministers Drawing Billions As Pension And Salaries

“Minna – Suleija expressway, for example is the gateway to the nation’s capital, Abuja for many Nigerians. We plead that this road should be given urgent attention for the completion of the dualization project as it is the only neighborhood road to the FCT without such a dual carriage way.

“We are aware of a budget head in the 2016 Appropriation with a lump sum which is at the discretion of the minister. We call on him to exercise this discretion in our favor by coming to the aid of numerous Nigerians suffering on these roads. We also expect these roads to be captured in the 2017 budget”, Senator Abdullahi added.

Senator Sani Mustapha (APC/Niger South) was not present at the briefing due to an urgent engagement. He however, threw his weight behind the call for the federal government’s urgent intervention on highways within Niger state.