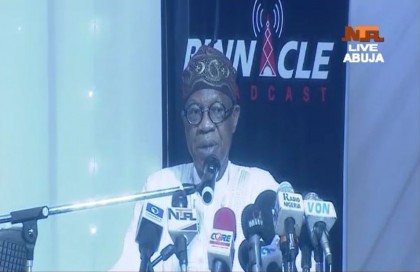 The Minister of Information and Culture, Alhaji Lai Mohammed, has said the Federal Government’s determination to meeting the June 2017 digitization deadline for the transition from analogue to digital broadcasting is borne out of the attendant benefits of such migration.

This was disclosed in a press release made available to the media, by SA to Minister of Information and Culture  Segun Adeyemi in Abuja.

The Minister made this known in Abuja on Tuesday while declaring open the 2016 AFRICAST with the theme “Digital Terrestrial Broadcasting: Financing Quality Content”

“The digitization of broadcasting offers Nigeria a lot of opportunities.

“The benefits are multifaceted and very far-reaching – in the areas of economics, politics, education, entertainment, science and technology and several other ways.

“Many have said that the impact of digitization on television will be revolutionary and I cannot agree less. With digitization, the TV industry in Nigeria will be able to raise over 1 billion dollars in one year.

“Also, digitization will increase the number of the current 450 TV stations in Nigeria,” he said.

Alhaji Mohammed explained that the Federal Government’s idea of Digital Terrestrial Television (DTT) is one in which there is free digital TV service called FreeTV – based on Freeview rather than requiring pay TV subscriptions and that the government is providing support to ensure that the FreeTV Set-Top-Boxes, also called decoders, are affordable at a retail price of N1,500.

He said with the Digital Switch Over, Nollywood will have a safe and profitable distribution channel direct to 24 million TV homes through the Set-Top Boxes with no piracy risk, which will generate $250m per annum of extra income for Nollywood.

The Minister said the digitization of the technology of broadcasting, which brought about a paradigm shift in the industry, requires broadcasters to be dynamic, embrace various platforms for diverse content and adapt to new tools with continuous access to content
throughout their business.

“The evolution of new broadcast platforms is threatening traditional broadcast platforms and channels. The reality though is that the
motivation apparently is that as broadcasters engage new platforms, the market opportunities are increasing, providing new revenue streams,” he said.

The Minister, therefore, urged regulators of broadcasting in Africa to begin to envisage and appropriate the larger implications of the emergence of multiple platforms by ensuring that the media continues to serve its peoples in terms of security, economic well-being and
technological advancement.

AFRICAST, which was introduced in 1996 by the National Broadcasting Commission (NBC), the broadcast regulator in Nigeria, is the platform
on which broadcast issues as they relate to Africa are discussed every two years by professionals, academics and policy makers.

It is also a platform for manufacturers of broadcast equipment and publishers of content who are targeting the emerging African market.