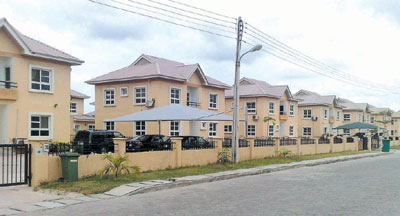 Latest NOI-Poll results has revealed that at least 5 in 10 (56 percent) residents in four major Nigerian states of; Lagos, Rivers, Kano and the FCT pay house rents, 25 percent of these same say they live in personal homes, 16 percent live in their family houses and a paltry 3 percent live in Company/Government owned apartments. Results also showed that 87 percent of residents of these cities advocate for government to regulate house rent in the country. This is mainly due to the high cost of housing in these areas as 65 percent pay between 101, 000 – 500, 000 Naira as rent annually.

Although 30 percent revealed that proximity or convenience is of high priority when renting an apartment, as a large proportion of respondents in this category (43 percent) attributed this to the level of traffic congestion in the state prompting residents to rent apartments based on nearness to the locations they frequently visit.
Furthermore, 52 percent expressed their dissatisfaction on their housing conditions while 48 percent asserted that they were satisfied with their housing conditions. These were some of the key findings from the Housing Poll conducted in the week of October 17th, 2016.

Almost 9 in 10 respondents residing in Kano, Lagos, Rivers and the F.C.T are advocating for housing regulation from the government. Rivers, FCT and Lagos residents ranked higher in the demand for rent regulation.

Adequate housing is one of the best indicators of a nation’s standard of living for its citizens. According to Maslow’s hierarchy of needs (which is a theory that prioritizes man’s needs in a tiered model), Safety needs, of which shelter is a component, is the second most basic need of man, right after physiological needs such as food, water, warmth and rest. Nigeria has experienced a phenomenal rise in the population of city dwellers without a corresponding increase in housing units which has consequently led to an acute shortage of habitable dwelling places in most cities over the past three decades. In many cases where you have available housing units, they are often expensive and remain uninhabited due to unaffordability. This results in overcrowding, homelessness, inadequate and poor infrastructure, poor living conditions, increased rate of poverty and its associated social vices.

In 1991, Nigeria established a new housing policy that was intended to provide solutions to the housing problems of her growing population. Twenty years later, the government confessed its inability to achieve the then set objectives and sought to review the National Housing Policy. In 2012, Nigeria got her latest National Housing Policy which promised Nigerians real mass housing. Till date, the new housing policy formulated to provide housing for even the poorest of Nigerians has not been implemented. 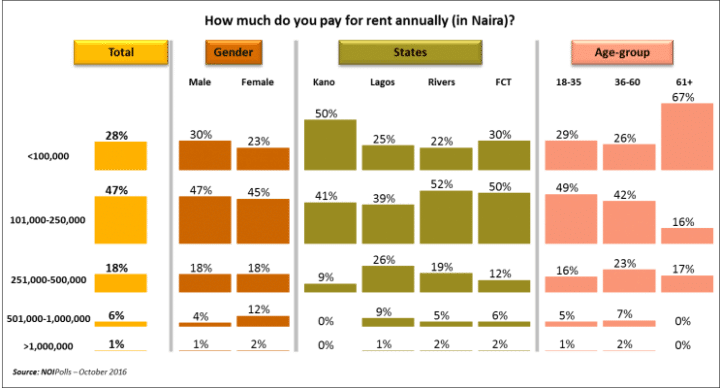 Evidently, Rural-Urban migration has led to the high demands for new buildings in Nigeria’s developed cities like Abuja, Kano, Port Harcourt and Lagos states. There is an estimated 17 million housing deficit in Nigeria and this represents about 256 percent increase in housing demands since 1991. Currently, Nigeria needs about 100 billion naira to implement a new housing strategy. The new housing strategy will include low cost housing units with flexible payment options targeted at the poor masses. At present, there are a lot of complaints about the high cost of building in many cities. It is commonly reported that Abuja residents complain of high cost of rent and this has compelled most of its population to live in satellite towns where they can afford their own homes and cheaper rent. For people who can afford to live in urban cities, there are observable mixed feelings about the conditions of the homes which are most often not worth the huge amount paid on rent. 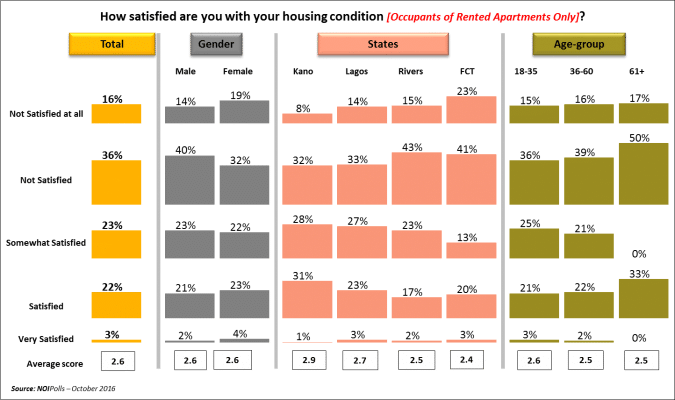 The survey also sought to find out the average amount paid for rent and the largest proportion (47 percent) of the respondents across the four focal states reported that they pay between 101, 000 – 250, 000 Naira. This infers that most people in these states live in satellite towns where such amounts are payable as rent averagely. This is followed by 28 percent who stated that they pay less than N100, 000, and Kano State had the highest proportion of respondents in this category which indicates affordability of housing in the state compared to other states surveyed. In addition, a meagre 1 percent admitted paying above 1,000,000 Naira as rent and this is mostly revealed by residents in Lagos (1 percent), Rivers (2 percent) and the F.C.T (2 percent). This could be attributed to the overpriced real estate, expensive hotels and inflation caused by the daily influx of both local and international migrants and expatriates.

Should Government Regulate Your Rents

Opinion of Nigerians was gauged on house rent regulation by the government and the findings revealed that 87 percent of respondents stated that they want the government to regulate rent across the country. This cuts across gender, states, and age-groups. The issue of land speculators and land grabbers faced by land owners and the indiscriminate high rental fees could be the reason a majority of the respondents advocated for house rent regulations by the government.

On the other hand, 13 percent were of the opinion that government should not be in the position to regulate house rent in the country. During the course of this survey, respondents in this category stated that the government did not build their houses for them, therefore they should be at liberty to make decisions on their properties.

Most residents (56 percent) in Kano, Lagos and the F.C.T. live in rented apartment with most of them (87 percent) paying between 101, 000 – N250, 000 Naira as rent annually. Though 52 percent expressed their dissatisfaction on the housing condition, 30 percent revealed that proximity or convenience is placed at high priority when renting an apartment. Hence, almost 9 in 10 respondents residing in Kano, Lagos, Rivers and the F.C.T are advocating for housing regulation from the government. Rivers, FCT and Lagos residents ranked higher in the demand for rent regulation.

In summary, emphasis should be placed on low and medium housing units to reduce the cost of housing, thus making it more affordable to many people. Also, middle and low income earners should be granted access to long term credit facilities with very low interest rates. Lastly, government should provide alternative strategies for house construction as well as provide favourable investment climate, infrastructure and mortgage insurance to low and middle income earners.