Minister of Power, Works, and Housing, Mr. Babatunde Fashola SAN, Thursday visited the Kashimbila Multipurpose Dam Project in Taraba State assuring that when completed, the Dam would serve the multiple purpose of protecting parts of the country from a predicted ecological disaster, provide electricity and support agricultural ventures in surrounding States of the Northeast.

Fielding questions from NTA newsmen after the inspection, Fashola, who said the project was conceived about 2007, pointed out that the purpose was a proactive step by Nigeria to prevent an ecological disaster that Science predicted would happen in future when the structurally weak volcanic Lake Nyos inevitably collapses, which would likely affect six states in the country.

The Minister, who named the states to include Taraba, Benue, Cross River, Delta and Kogi on the route of the tributaries of the Katsina-Ala River, added that the project was also conceived to provide electricity and support agricultural ventures in the surrounding communities.

He told the newsmen, “Nigeria has decided since 2007 or thereabouts to intervene and prevent the disaster by building a dam and from the dam you have water which is a force of energy, we decided to build a 40 MW plant to generate electricity to feed communities like Doga, Wukari, Takum, Kashimbila and many other communities in the Northeast and Yandev in Benue State who are not yet connected to the Grid”.

According to him, what the communities have presently is a 33KV line that transmits energy across 80, 90 to 100 and above kilometers adding that by the time the energy ultimately gets to the communities, it is not effective resulting in what is often referred to as “low current.”

“This project has three phases and three objectives to accomplish. First to prevent an ecological disaster that science predicts will happen and secondly from there provide electricity and support agriculture. This is the Kashimbila 40MW Multipurpose Dam for electricity and irrigation. But as I’ve said it was an ecological necessity”, the Minister said.

Emphasizing the benefits of the project to agricultural ventures in the host state and beyond, Fashola, who described Kashimbila  as one of the most beautiful parts of  Nigeria, added, “I have just come from Ecuador which is about 2,800 meters above sea level. I think this is about 500 to 800 meters in altitude. What you have here are mountains, rivers, and a very rich resource agro-base”.

The Minister, particularly, noted that the water supply embedded in the Dam could also be distributed far beyond the host community, Tagun, adding that government had opened discussions with the contractors on how the water catchment could be expanded beyond Tagun to serve most of Taraba and parts of the Northeast.

Noting that the water would be discharged from a high altitude, Fashola said government was also thinking of building a booster station which, according to him,  “may be a supplementary project to what they have”, so that the host communities could have fresh potable drinking water, adding, “That is the beginning of good health, that is the defence against diseases”.

Appealing for peace among the host communities, Fashola declared, “There is so much here for the people of this community so I want to use this opportunity to appeal to them to remain peaceful and not to throw this away”, adding that the President was determined that the project would be finished in record time.

“President Buhari is determined that this project will be finished in record time and it will serve all of its purposes; protect them from flooding because that flooding will happen when lake Nyos ultimately collapses, give them electricity and support their agricultural endeavors and give them clean water”.

On the progress of work at the project, Fashola said all the turbines and the electrical parts were already in place adding, “In fact, they have been maintaining it for two years to make sure nothing goes wrong”. He said as part of their strategy to protect the equipment, the contractors keep cats in the facility to prevent rats from eating the cables.

According to him, the contractors have over 300 kilometers of cables laid in the facility and there are equipment in containers in the premises to be used to complete the transmission adding that the containers also have the transformers and water treatment facilities.  “We hope that by the latter part of next year the water part will be completed”, he said.

The Minister said the transmission tower also visited during the inspection, would lead all the way to Takum and beyond adding, “They have started trenching and the last part of their equipment will come in before the end of this year. When they come in we can then start realigning the project plan and we will be more definite about month.

“But a lot of progress will be made between now and early 2018 latest by 2018 this project would have achieved all of its objectives: protection, energy, agric, and water supply”, he said.

The Multipurpose Dam, located on River Katsina-Ala in Takum Local Government Area of Taraba State, aside serving as buffer dam, will provide, through its hydropower component 40 Megawatts of electricity to be evacuated from Kashimbila by 132KV Double Circuit through Takum(65km), Wukari (75km) to Yandev (105 km) existing 132/33KV substations. 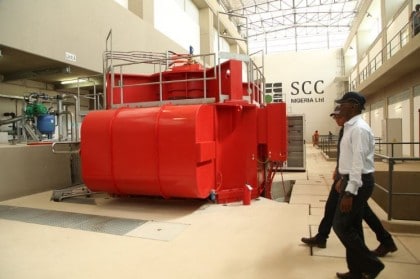 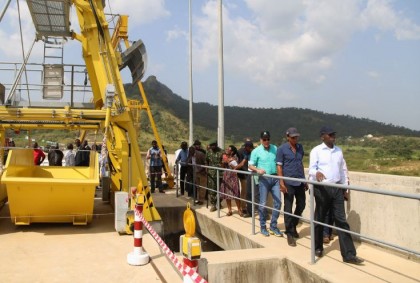 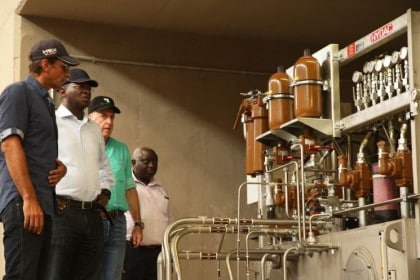 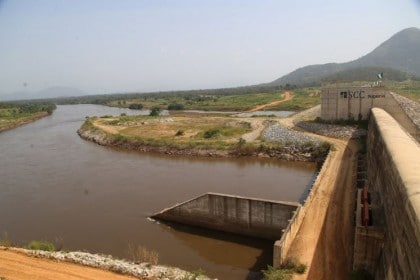