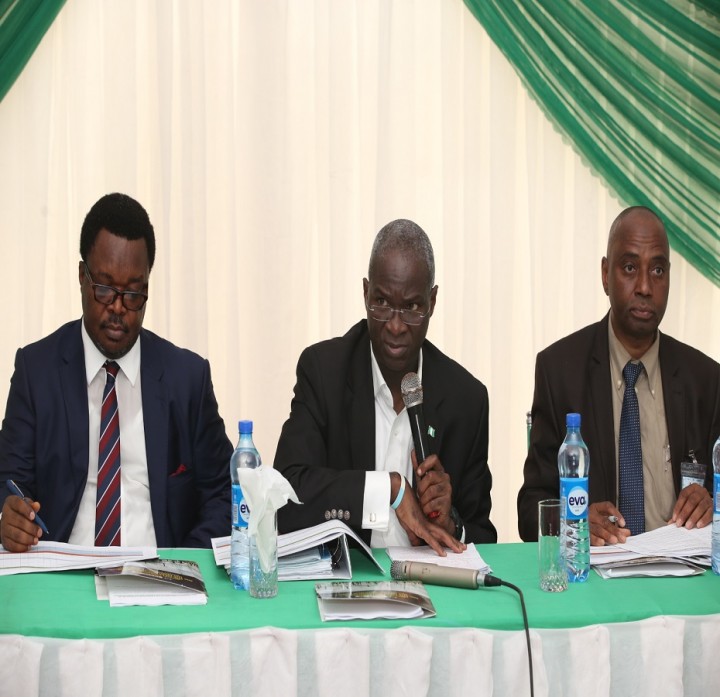 The Minister of Power, Works and Housing, Mr. Babatunde Fashola, has warned electricity Distribution Companies (DisCos) in the country to stop blackmailing the Federal Government over outstanding debts allegedly owed them by its Ministries, Departments and Agencies (MDA), saying Government would not succumb to blackmail and would only pay verified debts.

Fashola also advised the DisCos to pursue the debt issue in their capacities as Distribution Companies and not under the aegis of any association pointing out that although the Constitution guaranteed freedom of association, the privatization exercise that led to the transfer of the Distribution assets of power was not held between the Federal Government and any association but 11 individual companies.

The Minister, who spoke at the opening session of the 10th Monthly Meeting with Power Sector Operators in Uyo, Akwa Ibom State, expressed disappointment that the companies had placed advertorials under the aegis of the Association of Nigerian Electricity Distribution Companies, which failed to tell Nigerians the whole truth about the debts pointing out that the DisCos had so far failed to provide details of such debts for verification.

Describing the advertorials titled, “MDA debts not yet paid” with other sidelines such as “MDA pay your debts so that we can serve Nigerians better”, as a blackmail against the Federal Government, Fashola declared, “Let me say without any equivocation that government will not succumb to this Blackmail, at least not the Federal Government of Nigeria”.

The Minister, who recalled his promise at the assumption of duties that government would pay all duly verified debts, expressed displeasure that the DisCos failed to tell Nigerians in their advert of various meetings seeking solution to the debt problem and that at the last monthly meeting with them in Sokoto an online platform was provided by government to enable them submit the details of the debts with ease to which none of the DisCos had complied by the agreed deadline.

He declared, “I think that Advert should have told the Nigerian public that at our meeting in Sokoto, we provided an online platform where we asked all the DisCos to submit details of their debts to that platform so that we can verify it.

Noting that Government would not succumb to blackmail, Fashola again declared, “It is important to remind Nigerians that the privatisation exercise did not vest the DisCos in an association instead it was vested in 11 individual companies”.

“So while I respect the rights of association; indeed our Constitution allows freedom of association. But the Nigeria Government will not pay its debts estimated to be about N100 Billion under the aegis of an association.

“That is not how to resolve debts. Every DisCo knows how much power it supplied. Debts are not calculated by estimates. It is either N100Billion or less than N100Billion but not an estimate,” the Minister said.

Also faulting the DisCos on the grounds that the advertorials contained no information as to how many of them had supplied details of their audited account for the last three years, Fashola said the information would be more meaningful for Nigerians to know how many DisCos were complying with the regulations set by the Nigerian Electricity Regulatory Commission (NERC).

“That advert should also have told the Nigerian Public how many DisCos have gone to court to frustrate the attempt by NERC to hold them to their contracts so that they can pay the GenCos who have been sacrificing, the Gas producers, who have not received any money but have continued to act patriotically”, he said.

Noting that the responsibility for probity and accountability did not lie only with those serving in the public sector of government, the Minister added, “It lies with those who work in the private sector as well, it lies with every Nigerian.

Maintaining that he would respond on behalf of government to provide the other side of the information, any time the DisCos go to the public without giving them the full information, Fashola, who advised those of them who were unable to handle the job to seek strategic partners or take loans, added, “Let them do whatever they think is appropriate within the framework of their contract in order to get on with this job”.

On the objective of the monthly meetings, Fashola reiterated that aside bringing operators from production, transmission and distribution together once in a month to solve problems, to share experience and for some peer review, it also provided him the opportunity to see the various power assets that the Ministry superintends and has responsibility to coordinate and to make decisions about how to progress on those assets and projects, citing the Ikot-Ekpene Switching Station that had just been inaugurated as one such project.

The Minister, who said the meeting also helps “to create a platform for accurate information to the Nigerian public in order to reduce or dispel rumours and misinformation”, however, underscored its voluntary nature saying, “This meeting is not mandatory, it is voluntary for those who attend it and for those who choose to host it. So you don’t have to come if you don’t want to come”.

“And if at any time, the majority in this meeting form the view that this meeting is no longer necessary, it should please have the boldness to say so and we will wind it down. Our work and our relationship will continue nonetheless. Those things are as valid yesterday as they are today”, he said.

In a communiqué after the meeting the operators commended the Niger Delta Power Holding Company (NDPHC) for completing the Ikot Ekpene Switching Station, along with connecting lines to Calabar, Ikot Abasi and Ugwuaji which, they noted, increased the capacity of the national grid and linked the North and the South more reliably.

They also agreed on the importance of including local communities in the commissioning, inaugurating and handing over of power assets, saying it would encourage community ownership of the projects and ensure that local communities were given access to electricity when transmission projects were completed.

The Communiqué also took note of the Minister’s disappointment at the media advertorials by the Association of Nigerian Electricity Distributors (ANED) particularly the fact that they provided inaccurate information about debts owed by Government Ministries, Departments and Agencies (MDAs).

The Minister reminded the meeting that no DisCo as at November 17th 2016, had complied with the procedure for verifying the said debts for any payments by submitting complete evidence of the debts and also noted the failure of some DisCos to submit audited accounts for verification.

The Communique also acknowledged the intention of DisCos to participate in a stakeholders’ meeting with the Consumer Protection Council in order to improve transparency within the sector while NERC informed the meeting that audited accounts by Port Harcourt DisCo had not been received, and that they had been sanctioned adding that the status from the previous meeting remained unchanged.

While the Transmission Company of Nigeria (TCN) listed projects to improve power supply in the South South and South East regions, noting significant progress on projects in Afam, Alaoji, Port Harcourt, Yenagoa, Itu, and Nnewi, NERC provided the metering updates covering the total metering by Abuja, Enugu, Eko, Kaduna, Kano, Jos, Benin, Port Harcourt, Ibadan and Ikeja DisCos both for the Months of October and actual metering from January to October this year.

READ: How We Achieved More Power For The National Grid In Spite Of Vandalism, Sabotage ~ Fashola