The Nigerian Army says its troops on Sunday averted attacks on oil pipelines located at Gulobokri and Eweleso communities in Brass Local Government Area of Bayelsa. 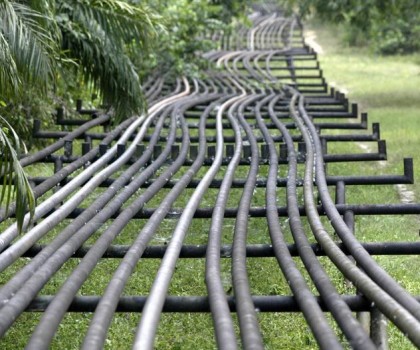 The acting Director of Army Public Relations, Col. Sani Usman disclosed this in a statement issued in Abuja on Sunday.

Usman said the attack was averted by the troops on patrol of areas around Brass in Bayelsa.

According to him, the patrol team has an encounter with some armed militants in two speed boats with intent to blow up Nigerian Agip Oil Company pipeline at Gulobokri.

He said that in the early hours of today, May 29, troops of 343 Artillery Regiment of 2 Brigade, 82 Division of the Nigerian Army, carried out patrol within the general area of Gulobokri and Eweleso, which was around Brass area in Bayelsa State.

He added that during the exercise, the troops encountered some armed militants who opened fire on the patrol team.

“The troops responded with overwhelming superior firepower and as a result, the suspected criminals sped off from the area with many of them sustaining gunshot wounds.

“Unfortunately, a personnel of Nigeria Security and Civil Defence Corps (NSCDC) attached to the team sustained gunshot wound and has since been evacuated and he is in a stable condition,’’ Usman said.

Usman also said that another patrol team of the same unit of 82 Division, Nigerian Army, averted another attack on an oil facility at Perigbene House Boat in Bayelsa.

He said the troops on patrol to the area encountered militants in three speed boats also on a mission to attack another critical infrastructure in the area.

Usman said the troops killed most of the militants while others escaped with gunshot injuries.

He said the casualty figure on militants could not be ascertained as it was raining heavily adding that the raging storm could not allow troops to go on in pursuit of the escaping criminals.

Usman added that a mop-up operation had been organised for those militants that escaped with gunshot wounds adding that they might be receiving treatment in the neighbouring communities.

He said troops would continue to intensify patrols in the general area to further halt planned attacks on key public infrastructure in the area.