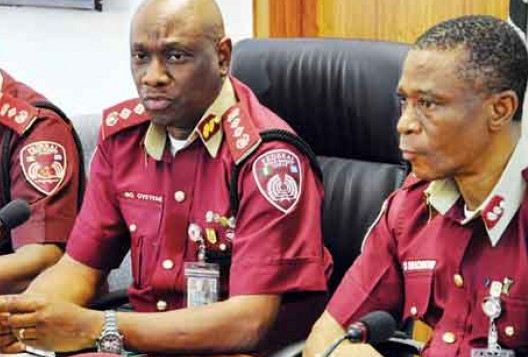 The Corps Marshal of the Federal Road Safety Corps (FRSC), Dr Boboye Oyeyemi has restated the commitment of the FRSC to the values of civility in the enforcement of traffic rules and regulations, saying his management abhors abuse of fundamental human right of road users. He stated this while declaring open a two day capacity development programme organized for patrol officers from across the FRSC commands.

According to the Corps Marshal, the workshop was in furtherance of the Corps’ philosophy of robust consultation with staff and building of consensus among them in the commitment to engender an FRSC that is cohesive and managed by staff that can respond adequately to the challenges of delivering road safety to the people.

“That is why we have sustained the practice of improving the capacity of the staff and exposing them to modern challenges of traffic management through capacity development programmes,” he stated.

Oyeyemi further stated that the workshop was another demonstration of his Management’s commitment to improving on the knowledge of the staff especially, those that carry out enforcement in this period of change mantra when every operational activity is expected to be based on the rule of law and due process. He noted that FRSC was built on the core values of civility which legitimizes its operations.

“As some observers have rightly stated, FRSC remains the only security agency in Nigeria that has been able to carry out the magnitude of enforcement it has done on the nation’s road without recourse to use of arms,” he further stated.

He pointed out that people’s obedience to the FRSC has never been based on their fears of the arms, but a demonstration of their willingness to submit to the Corps based on their conviction about the rightness of its actions.

“We have successfully sustained this value of civility for the 28 years that we have patrolled the nation’s highways, despite the pressures to bear arms in the aftermath of the militarization of the populace.

“We can therefore, not afford to take the huge trust that members of the public and government repose in us through our sustained civility lightly. We therefore need to build on the knowledge of civility among our patrol officers who lead patrol teams at this period when the nation is experiencing change mantra under the administration of President Muhammadu Buhari, GCFR,” he stated.

The Corps Marshal observed that as a nation that has embraced democracy, there was the continuing need to build democratic values in its institutions, noting that staff whose responsibilities have direct bearing on people’s human rights must be enlightened to appreciate civility and the imperatives of observing human rights. “FRSC as a people-centered organization will therefore, continue to uphold the virtues of civility in its enforcement of traffic rules and regulations,” he said.   ,

The FRSC Boss urged the participants to utilize the opportunity of the training to add to their understanding of the values of civility in the enforcement of traffic rules and regulations under the civil democratic dispensation. He enjoins patrol teams to see themselves as worthy representatives of the FRSC by always observing the highest values of decorum, transparency, honesty and civility in their operational activities.

“You must, therefore, utilize this rare opportunity to share ideas with one another and interact closely while making quality contributions that could enhance your understanding of the subject for sustained positive image of the FRSC,” Oyeyemi stated.

The two day capacity development programme which attracted selected officers from across the FRSC commands has as its theme, “The Challenges of Civility and Enforcement of Traffic Rules,” on which the carefully selected Resource Persons would make various presentations.