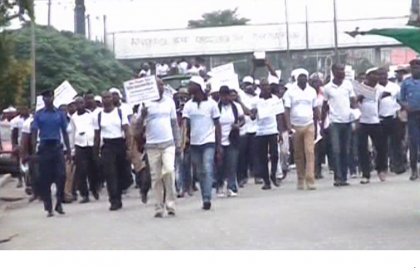 Hundreds of youths in Rivers State took to the streets of Port-Harcourt to protest the incessant attacks on oil facilities in the Niger-Delta. The youths under the aegis of the National Youth Council of Nigeria, Rivers State Branch is also protesting against other social vices in the state.

The rally kicked off at 1st Artillery on Aba road and en-route the council’s headquarters on Azikiwe road, with the youths carrying some banners with various inscriptions.

President of the body in Rivers State , Sukubo Sara-igbe Sukubo, said the protest became necessary because of the rise in cases of kidnapping and other criminal activities in the state. He said that the activities of the vandals is affecting the economic well being of the region and that of the nation and called on the aggrieved youths to revoke their stand on destroying pipelines and other oil facilities in the region.

Sukubo Sara-igbe used the medium to thank Belema oil, an ingenuous oil company for providing over 500 jobs for youths in the state.