How We Achieved More Power For The National Grid In Spite Of Vandalism, Sabotage ~ Fashola 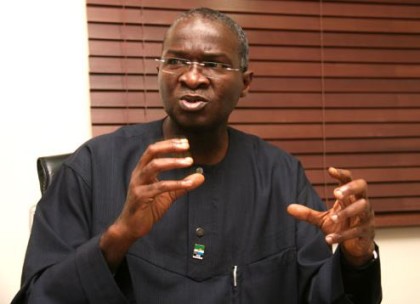 ·       “Generating capacity of the hydro plants was enhanced as their hitherto broken down  turbines received due attention”, he explains

·      Highlights steps to strengthen transmission across the country

·      Real problems in the Power Sector are not technical but man-made and we are trying, one after the other, to try to solve them – Minister

Hakeem Bello, Abuja; Restoration of repair works and maintenance of broken down turbines at the nation’s hydro plants, which enhanced the generating capacity of such plants during the increased circle of rainfall and water levels, was the major contributing factor to the current addition of more power to the National Grid, Minister of Power, Works and Housing, Mr. Babatunde Fashola SAN, has explained.

Fashola, who gave the explanation when he made a presentation at the Wilson Centre, Washington DC, USA, said the repair works and maintenance carried out on the hitherto abandoned turbines, as part of steps taken to achieve Incremental Power, was responsible for the additional power to the Grid in spite of the  vandalism and sabotage of power assets.

Making a presentation on the theme, “Leadership and the Politics of Reforms in Africa: Lessons from Nigeria”, the Minister said electricity supply increased by 400 Megawatts in the last two weeks due to increase in the generating capacity of the hydro Power Plants achieved through the repairs and maintenance carried out on them in the last one year.

He recalled that over 3000MW of power had been lost over the last six months due to consistent vandalism and sabotage of oil and gas pipelines and assets, adding that the generating capacity of the hydro plants was enhanced as their turbines, abandoned and not maintained for over three decades, received due attention pointing out that the increase in rainfall would not have meant much if the turbines were not repaired.

“In the last one year, we have done a lot of repairs and maintenance work so that every year, of course, there is increased circle of rainfall and water levels, but if you have three turbines and only one is working you can only depend on one. So where we had one working, we now have two, where we had two, we now have three”, he said.

According to the Minister, “So the hydros are giving us almost 400MW of power and that is a lot of power given our situation. And we have added about 1MW of Solar and there is more coming; so I think we are on our way”.

The Minister had earlier promised that current boost in power would be further strengthened by various transmission projects currently being carried out in several axis of the nation’s six geo-political zones.

Coming against the background of complaints in some quarters that transmission was the weakest link in the power chain, Fashola, who was fielding questions from a Correspondent of the CNBC Africa in an interview, said progress was being made in the expansion of transmission adding, however, that it would be consistent with achieving incremental power within the value chain.

The Minister listed such areas where expansion projects are currently going to include the Eastern Axis where the Ikot-Ekpene – Alaoji Transmission project takes off up to Enugu from where it would  boost power all the way to Markurdi adding that the local issues that earlier hindered work, such as the one in Itu and in Abia State had been resolved.

According to the Minister, “We have finished the one in Okada in Edo State and there are more that have been awarded this year; the Gurara Transmission to take power from Gurara into Kaduna is nearing completion. It is a site I have visited so work is going on”.

Fashola dispelled fears from some quarters that with Manitoba Hydro International out of the picture, the Transmission Company of Nigeria (TCN) would not be able to cope with the energy transmission capacity in the country assuring that the company was capable of carrying the capacity effectively.

According to the Minister, “The transmission capacity of TCN is well over 5,000MW as we speak today. The capacity we have ever generated is 5,074MW. So we can carry what we generate today. We are not vulnerable as not to transmit what we have”.

Frowning at what he described as generalization in just describing the TCN as the weakest link in the electricity value chain, the Minister, who likened transmission to a transport system, asked, “If you know that the transmission system is the transport system, if you have a bus that carries ten people and I hire you to carry ten children for me, can I complain that you will not be able to carry them?”

Also noting that building transmission station that would be beyond the capacity of the amount of power produced in the power chain would attract extra cost, Fashola, however, said government was planning for expansion of the Transmission segment of the sector because of idle power that is stranded as a result of lack of gas.

“So as we are planning to solve the gas issues we are also planning simultaneously the expansion of the transmission system to synchronise with what is available because idle capacity is also a cost, the capacity that you build but you don’t use because it is built through a bank loan”, he said.

Fashola disclosed that there is current plan to go up to 20,00MW within a time frame consistent with how the power increases so that there would be no idle capacity in the value chain adding that these are some of the things that engage the attention of Operators in the system during the monthly meetings.

Still speaking on the recent improvement in power supply across the country, Fashola attributed it to the large volume of water feeding the nation’s hydro power plant due to increased rainfall and the maintenance work on the plant which has reactivated more turbines that were previously inactive due to lack of maintenance over the years.

Fashola said as a result of the combined effect of the large body of water feeding the plant and the additional turbines that have been reactivated, the plant was now producing additional 400MW more than its capacity last year adding, however, that the increase in volume of water would not have made any difference if the turbines were not reactivated.

He added, however, “But what has changed is that maintenance work that we started last year on the plant has enabled us to get more power. We now have more turbines working to produce more power. It wouldn’t have mattered whether we have abundant rain if the turbines were not working. We have gained about 400 extra Megawatts on what we used to get from the same hydro plants last year”.

Recalling that the country attained over 5,000MW of power for the first time in February this year, Fashola, who noted that the power dropped to about 3,000MW because of gas outages, added that the Ministry of Petroleum has been working hard to put the gas pipelines back.

“But roughly from about 2,000MW of power which we were left with from 5,000MW we have climbed now to 3,000MW, averaging about 3,4000MW to 3,5000MW in the last five weeks. It is still mixed blessings here and there. Some people have power while some people still don’t have. So that is incremental power that we have talked of the first time”, he said.

Describing the phenomenon as “touch wood”, the Minister, who said people should just hold their breath yet, added, “We are not out of the corner yet until we get stable power, then maybe we can be thinking of consistency. But right now, at least, the hydro power is at peak; just like solar power, its efficiency during the day is not its efficiency at night”.

In the area of projects aimed at achieving incremental power, Fashola, who said the focus of government was mainly on the Energy Mix initiative to diversify energy source, listed such projects to include the Zungeru Power plant where work is nearing completion after more than two years of suspension of work and the Azura Power Plant in Edo State where, according to him, work was also suspended for over two years due to court issues.

Noting that there are also many smaller hydro-plants like Chalawa hydro plant, Ikere  hydro plant, the Minister said there are more than 40 such small hydro-plants which government was also trying to bring into procurement, adding “We have completed the business plan on eight and we are trying to see if we can get that on. That would help our rural electrification projects because those dams are in the rural areas”.

On Solar, the Minister, said the country has a lot of sunlight that could be used when the radiation was optimum and efficient during the day and also in parts of the country where the radiation levels were most prolific so that efficiency would be delivered.