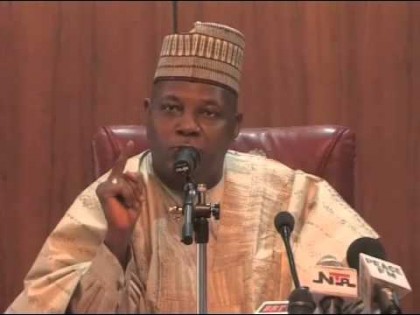 Governor Kashim Shettima on Tuesday passed the night in Uba town, once held by Boko Haram in Askira-Uba local government area of southern part of Borno State. The Governor left Bama on Tuesday where he had relocated for nearly one week to mobilize reconstruction works and return of civil authority in the town which was worst hit by the insurgent attacks.

Uba town was put to life when the Governor arrived the Emir’s palace as he was received by obviously happy residents. Governor Shettima inspected destructions by insurgents during their occupation in the town and held meetings with locals towards enhancing community policing.

The Governor also inspected destructions in Lassa, another major town in Askira-Uba local government area during which he inspected houses, at the popular EYN church and gave directive for immediate reconstruction.

Before arriving Uba, Shettima was in Pulka, a populated village in Gwoza local government area during which he interacted with hundreds of returned IDPS. The Governor proceeded to Gwoza which served as a Boko Haram caliphate and inspected destructions before addressing elders and women at separate gatherings. While addressing hundreds at the Palace of the Emir of Gwoza, Alhaji Mohammed Idrissa Timta  the Governor pledged commitment to ongoing reconstruction works in different parts of Gwoza.

Gwoza is second to Bama local government area that suffered the same fate of destruction before it was declared as Boko Haram Caliphate in August, 2014.

Shettima directed the Commissioner for Reconstruction, Rehabilitation and Resettlement, Dr. Babagana Umara Zulum to ensure that his ministry align with professional engineers/builders from Gwoza to immediately put the liberated town in good shape for comfort of Internally Displaced Persons (IDPs) who most of them have started returning back home.

“I want to sympathize with you over the unfortunate calamities perpetrated by boko haram in recent past, we are here to tell you that as government, we will do everything possible to rebuild all your destroyed houses brick by brick.

“We have also come with assorted food items including 1500 bags of 25kg rice, 1500 bags of beans, 1000 cartons of suphaghetti, Sugar, salt among other relief items.

“I urge some of the IDPs from Gwoza who are still residing in resettlement camps in Maiduguri and other places to please come back and join you, because, there is no any good place than home.

“I want to thank the federal government and the Chief of Army staff as well as the entire officers and men under the ‘Operation Lafiya Dole’ in the north east for their gallantry effort in degrading remnants of boko haram.

“My appeal to you all is to please give maximum support and cooperation to the military and the civilian JTF who are here with you to give you adequate security”. Shettima stated.