How FG Is Promoting Manufacuring And Local Production In Nigeria ~ Osinbajo

*Innoson, Shangdong firms of China to partner in $1B foreign investment plan within 12-24 months 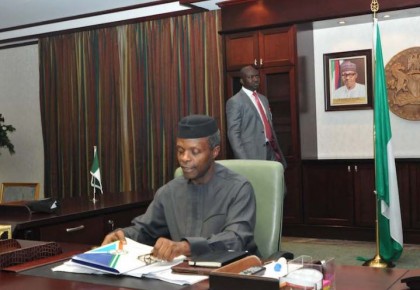 In the next few years, the Buhari administration would continue to actively pursue a plan for the massive manufacturing and production of goods in the country as much as possible, according to Vice President Yemi Osinbajo, SAN. According to the statement issued by his Senior Special Assistant-Media & Publicity, Laolu Akande, the VP said, In that effort, the Federal Government will ally with business interests who can facilitate the plan, Prof. Osinbajo disclosed, adding that “manufacturing in Nigeria is a primary objective of this government, it is a work we intend to do in the next few years to manufacture and produce in Nigeria as much as we can.”

Also Read: We will work with Nigerian SMEs to boost export – VP Osinbajo

The Vice President was speaking today at a meeting in the Presidential Villa with a delegation from the Innoson Group and some Chinese business interests including Shangdong Broadcasting Group led by Chief Innocent Chukwuma, Chairman and Chief Executive Officer of Innoson Group.

He explained that it is because of the administration’s commitment to spur manufacturing and local production in the country that the initiative of Innoson Group to work with Chinese partners is being addressed as a “strategic collaboration.”

According to Chief Chukwuma, the Chinese firms have decided to invest about $1B in the Nigerian economy within the next 12-24 months.

Also Read: Buhari Will Do Everything To Make Nigeria Great – VP Prof. Osinbajo

The initiative, the VP said  “is bound to yield very good fruits and do very well,” adding also that the timing is right “as we are at a point that we must engage technological solutions in our development plans.”

Prof. Osinbajo then explained the importance of competition and competitive pricing in such an effort. “In all we try to do, we believe there must be competition, competitive prices and plans,” the Vice President noted, believing that the Chinese firms must have taken that into consideration as well.

Earlier, Chief Chukwuma detailed the investments intended by the Chinese firms to include:

*a credit facility of $300m for local production and supply of 5-8 million Set-Top Boxes for the Digital Switch-Over in broadcasting in the country to meet a target date of June 2017.

*a further investment of $600m for Smart City CCTV camera and IT solutions for taxation, both using Cloud Computing and E-Education IT solutions with big data centers in all federal universities and polytechnics in the country.

According to the Chairman of Innoson Group, “every plan to make a success of all these projects have been concluded between our two parties.”

Responding the Vice President stated: “we are looking forward to working with you in the next few months to realize the plans that you have laid out.”

The Deputy Minister of the Communist Party in Shandong Province and Chairman of the Shandong Broadcasting Group, Mr. Liu Baoju, and Mr. Huang Gang, Senior Vice President of Inspur Group were among dignitaries in the business delegation at the meeting.