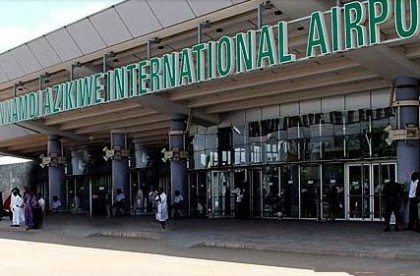 Ahead of the planned reconstruction and repair of the Abuja Airport runway which would lead to a diversion of air traffic and passengers from Abuja to Kaduna, the Minister of Power, Works and Housing, Mr. Babatunde Fashola SAN, at the weekend inspected progress of work on the Abuja-Kaduna Highway.

The Minister, who stopped at several points on the road to ascertain the quality of work being done in company with the Minister of State, Hon. Mustapha Baba Shehuri and other senior officials of the Ministry, said the Federal Government through the Ministry was effecting the emergency repair work to ensure that the road was safe and motorable even as he called for careful driving to avoid accidents during the period of closure and on the nation’s roads generally.

In an interactive session with newsmen after the inspection, Fashola said although government has embarked on the emergency repair of the road to make it safe by removing the potholes , a lot depended on the users of the road to ensure that they remain safe and avoid accidents while the closure lasted.

The Minister, who said he would wish a day when no accidents would be reported on the nation’s roads, expressed regrets that such a wish remained farfetched adding that apart from the condition of the roads, human error constituted, from available reports, a very significant factor in road accidents.

Recalling an accident that occurred on the same day on the road involving a heavy truck, the Minister said the accident most likely happened in the night advising that those who drive heavy trucks in the night must try and get as much as sleep as they could during the day.

“There are rules in the operation and utilization of automobiles”, he said adding that the FRSC has continued to address the problem in terms of education, enlightenment and the introduction of a speed limiting device while his Ministry was also looking at how to assist them in the short to medium terms by introducing some speed cameras to deter people and support the efforts of the Corps.

Pointing out that the wish to stay alive rested ultimately it in the hands of drivers themselves, Fashola said such a wish must be matched with abstention from substance abuse that some vehicle operators subject their bodies to adding that such abuses make their bodies vulnerable.

He, however, said the effort to prevent or limit accidents on the nation’s roads was an obligation on the government which, according to him, must not be given up adding that there was need to also go back to the primary schools and begin to teach road traffic behaviour from the foundation while also enlightening the older generation “that they must begin to prepare the younger generation to make sure they become better road users in future”.

On the purpose of the inspection, the Minister, who clarified that the work being carried out on the road was an emergency repair, and not the real reconstruction of the road, essentially to remove the potholes and reduce the risk of accidents, added that the purpose was to see the progress made on the repairs as the date for the closure of the airport was drawing near.

According to the Minister, there is a major contract provision that is going through Procurement for the essential reconstruction of the road, which he recalled, was constructed in the early 1990s when it was expanded from a single carriageway to a dual carriageway adding that no record indicated that there has been any major repairs ever since.

“So the road needs to be rebuilt because it has been subjected to a lot of axle load. But what we are doing right now is emergency repairs to remove the potholes to make the road safe for commuters ahead of the planned reconstruction and repair of the Abuja Airport runway which will lead to a diversion of air traffic and passengers from Abuja to Kaduna which will start on the 8th of March”, he said.

The Minister, who noted that the role of his Ministry was to make the road motorable and safe for commuters reiterated that he just came to inspect the place to see the progress of work first hand, promised that the Ministry would deliver the road and hoped that the Aviation counterpart would also deliver the runway in six weeks as scheduled by it.

He told the newsmen, “You can see that some sections have been resurfaced completely but that is not the main reconstruction of the road; let us be clear about what is happening here”.

“The whole purpose of this contract is to cover the potholes on the 160 kilometres road two lanes on one side and two lanes on the other side; so that is really to cover 620 kilometres of potholes; that is a contract for N1 Billion”, Fashola said adding that the amount was not what would be needed to rebuild the road.

The Minister reiterated, “So let’s be clear about that. This is emergency short term. When the Bureau for Public Procurement (BPP) gives the no objection contract, we will start when the airport runway would have been completed”.

Abuja Airport to be Closed For 6 weeks