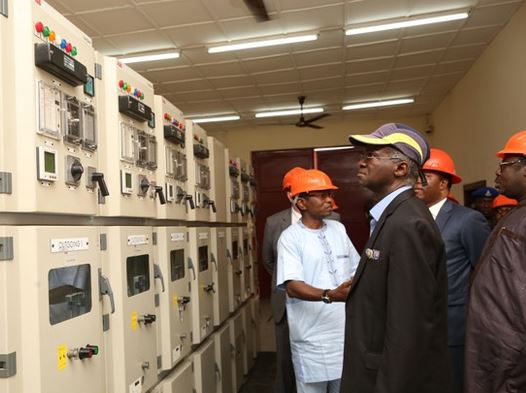 Progress has been reported on steps being taken by the Federal Government to address the issue of liquidity in the Power Sector just as the engagement of Niger Delta Communities by the Acting President, Professor Yemi Osinbajo, to find lasting solution to pipeline vandalism in the region is also yielding fruitful results.

This was stated in a a Communiqué issued after the 12th Monthly Meeting of the Minister of Power, Works and Housing, Mr. Babatunde Fashola, on Monday, with Power Sector Operators in Oyo State, which took place at the Ibadan Electricity Distribution Company (IBEDC) Olorunsogo Injection Substation, Akanran, Lagos-Ibadan Expressway.

The progress reports which also included key policy steps taken by the Federal Government to improve the stability of the Sector such as the inauguration of new Commissioners for the Nigerian Electricity Regulatory Commission (NERC) and the appointment of an interim Managing Director of the Transmission Company of Nigeria (TCN) to reform the company for a more robust service to the industry.

In TCN also reported the completion of the Osogbo-Ede Transmission Line adding that it was awaiting connection to the soon to be completed substation which, according to the company would be achieved within the next 12 months.

Also, in his submission at the Meeting, the Managing Director, Transmission Services Provider (TSP), Engr. Tom Uwah announced the completion of a transformer installation project in New Bussa adding that the substation should be ready for energizing in six weeks following the carrying out of pre-commissioning tests.

Noting the negative impact of sabotage of gas pipelines, which, according to it has led to a severe limitation in power generation in the country, the Meeting commended the efforts of the Acting President, Professor Yemi Osinbajo, in engaging communities in the Niger Delta in an effort to address their concerns and therefore, bring a lasting solution to pipeline vandalism.

Also commending the Federal Government for the recent inauguration of the new commissioners of the Nigerian Electricity Regulatory Commission, and the appointment of an interim Managing Director for TCN, the Meeting, which described the policy step as vital to the reformation of the company for a more robust service to the industry, added that they would also improve the stability of the Power Sector.

Expressing regrets that the gross liquidity problem was currently limiting the functioning of the sector, the Meeting acknowledged the work currently underway to identify, verify and pay the debts owed by government Ministries, Departments and Agencies (MDA) to DisCos, as well as gas debts and generation debts.

It noted with delight that the Abuja, Ikeja, Ibadan and Yola DisCos have complied with data requirements and that verification of their submission is underway “on a first come first serve basis”, pointing out that a deadline of 17th of February 2017 was set as a deadline for submission of audited and management accounts while February 28, 2017 was issued to receive submissions on MDA debts from the DisCos.

On the need for safety in the installations and operations of the service providers, the Meeting, which commiserated with the family of victims of recent electrical accidents, charged all DisCos to reinvigorate their efforts on safety of their networks and facilities.

The Meeting, while also harping on the need for good service delivery as one of the most viable means to stabilize the Sector, also directed the Nigerian Electricity Management Services Agency (NEMSA) to monitor the resolution of the issues arising from such electrical accidents.

The Meeting reiterated that service delivery should remain a key focus of the industry with enhanced efforts to engage community members in order to raise awareness and appreciation of work completed and resolved to undertake a stronger effort to connect the host communities of power installations to power supply.

In continuation of the regular practice aimed at creating healthy competition among the service providers, the Market Operator (MO) announced at the meeting that the Eko DisCo showed the highest payment performance to service providers, followed by Yola DisCo, while it encouraged other operators to fulfil their obligations to the market.

Apart from the Minister, who chaired the Meeting hosted by the Ibadan Electricity Distribution Company (IBEDC), other top officials in attendance at the Meeting were the Minister of State, Hon. Mustapha Baba Shehuri, one of the recently inaugurated Commissioners of NERC, Mr Dafe Akpeneye, Managing Directors and CEOs of GenCos, DisCos and the TCN.