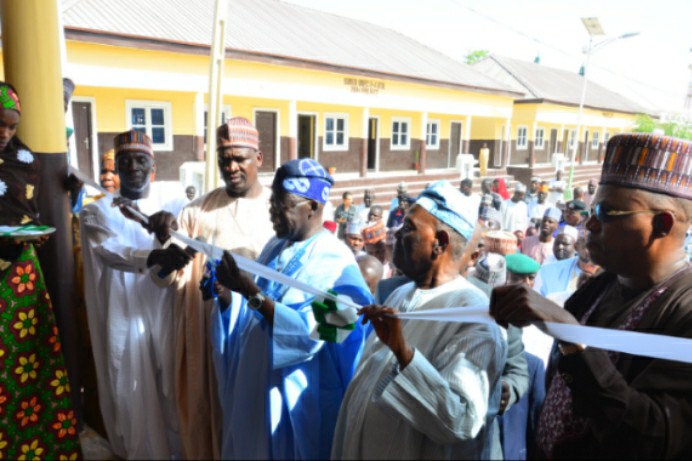 Why Estate In Borno State Was Named After Bola Ahmed Tinubu

Borno State Governor, Kashim Shettima has explained that his administration named an estate after Asiwaju Bola Ahmed Tinubu in order to appreciate him for freeing the State’s APC from the hands of a ‘tyrant’ who made frantic efforts to hijack the party’s machinery ahead of the 2015 Governorship, National and State Assembly elections in Borno but was resisted by forces led by Tinubu in favour of the Governor and majority of his associates.

The Governor’s explanation is in relation to Tinubu’s two-day visit to Borno on Monday and Tuesday during which he commissioned 432 houses, 13 primary and junior secondary schools and a fully furnished ‎estate with 26 apartments in 5 sets of three-storey buildings for medical doctors, named ‘Bola Tinubu Court’.

Shettima recalled that he succeeded in taking control of the Borno APC in 2015 largely because Tinubu refused to support the game plan of a wealthy tyrant (whose name he didn’t mention) that fought hard to seize the Borno APC as his personal estate.

“For us in Borno State APC, I must confess, that we owe our political freedom and independence to not only our firmness but importantly, to the wisdom and sincerity of Asiwaju Bola Tinubu. Someone has asked me yesterday and sort to know our reasons‎ not for inviting the Tinubu for commissioning of projects but for naming a project after him in Borno State. I replied the person in five words by saying, it’s our show of gratitude. Naturally, the person asked me, gratitude in what sense. I explained that after the APC was created in the build up to the 2015 elections, we firmly resisted serious attempts by someone who wanted to completely hijack the entire party machinery with total disregard for our existence. But despite our resistance, that person would probably have had some oxygen if he had secured the support of Asiwaju.

From day one, Asiwaju Bola Ahmed Tinubu was opposed to political tyranny in Borno State and was in support of our political freedom and democratic liberty. Asiwaju showed clear support for the APC machinery in Borno State to rest with us because he knew that our commitment to the APC was genuine and not for the sake of trading the party, the APC with the then President seeking re-election under PDP. I always told people that yes, politics is a local affair; yes, we carried out the fight and deployed different strategies for our freedom but then, the truth of the matter is that there two people whose contributions to us were master strokes. We had President Muhammadu Buhari’s electrifying popularity to our advantage which significantly helped us during the elections.

Before the elections, we had the wisdom and sincerity of Asiwaju Bola Ahmed Tinubu who supported us to remain in control of the APC in Borno State, secured our primaries and deployed energies to winning not just the Governorship but also all the 3 Senatorial, 10 House of Representatives and 28 State Assembly seats in Borno State. ‎Your Excellency, we grateful to you for your leadership and for your sinceresupport in our battle of freedom from political tyranny, freedom from a one-man-show, and freedom from politics of being APC in Borno and PDP in Abuja” the Governor said.

Shettima also paid tribute to Tinubu for his humility, noting that the attitude of his wife, Mrs Oluremi Tinubu reveals the man in him.

‎”There is an African saying (I think from Ethiopia) that often times, the true nature of a very powerful man, is easily seen from the character of his favourite wife. I recall that on Wednesday, 25th of November, 2015, about 10 Governors, mostly of the APC attended the funeral of Mama H.I.D Awolowo in Ikene, and after that funeral we all drove to Lagos in a bus straight to the residence of our National Leader, His Excellency, Asiwaju Bola Ahmed Tinubu in Ikoyi.

We actually went to see him off since he was inside the bus with us to the funeral. I noticed that as soon our bus reached the house, Distinguished Senator Oluremi Tinubu started rushing, in fact she was practically running to enter the house. She was completely acting in a true fashion of an African Woman. I kept wondering why she was in such a rush. As the wife of our National Leader, I was expecting the usual slow and proud walk of wives of powerful men. She had every reason to show pride after all, her husband is our leader and most of us, the Governors were all holding back ourselves in submission to the aura of Asiwaju. To the shock of all of us, by the time we entered the residence of Asiwaju, his wife had moved straight into the Kitchen in the midst of cooks, and you could see how free and friendly she was with the cooks. She began to bring food to our table by herself and some of us were not comfortable but she insisted. To our greater shock, she insisted on dishing out the food to each of us and members of our delegation. She served not less than 30 persons and also picked dishes herself to convey food to some of our aides seated outside. I must confess that my experience that very day was my closest contact with extraordinary humility in a wife of a very powerful man.

The cooks didn’t look surprised with how she was behaving, which strengthened the fact that she was just being her normal self; you could tell from the atmosphere in the house that she wasn’t pretending. I was listening to my aide discussing Mrs. Oluremi Tinubu personally served him and his colleagues water to drink. And Your Excellencies, when somebody takes a look at that house in Ikoyi, it is a small house that other persons far less important than Asiwaju would ordinarily see as being small for their status. Some women married to powerful men like Asiwaju would insist onliving in mansions made up of 20 living rooms and 100 bedrooms.

Mrs. Tinubu’s humility, her kindness, her dutifulness and her Africanness all go to reveal one thing, and that is the character of the man she is married to. There are exceptions but generally speaking, most women try to borrow the characters of their husbands, they relate with others based on how their husbands relate. If their husbands have no respect for human dignity, women even go the extra mile by being brutal. From 2011, I have seen you relate with Governors you helped to install. I have seen you treat them with courtesy and mutual respect. You call most Governors by the title of Your Excellency, when other godfathers address Governors by their first name.

In Borno here, we had a Governor who never used the prefix of Your Excellency in addressing his own Deputy Governor. In public, he called his his Deputy by his first name ‘Adamu’. But Your Excellency, in your case, you have demonstrated uncommon humility. Rather than applaud you, I want to instead, congratulate you for being humble in the midst of enormous influence. I congratulate you because humility in the midst of power is a rare gift that God gives to a few. Nothing destroys a powerful man like contemptuous arrogance. Before God and before man, arrogance is distasteful. Even those who are arrogant don’t like fellow arrogant persons. Those who are far from your kind of influence see themselves as creators of life. In your case, Your influence is not limited to Nigeria but spreads toother countries in Africa, and your connections are across the length and breadth of this world. For those who may not know, your influence wasn’t by accident. You fought for democracy and stood against dictatorship while many of us were still looking for our bearings in life. You earned your reputation, earned your political pedigree, and earned you standing in theAPC. What I find very attractive is your pragmatism in politics and your very good sense of judgment in identifying and nurturing exceptional leaders.Over time, there is hardly any of your political godsons whose capacity isquestionable. I want to thank you for your leadership role and for being a guide to the young and old” the Governor said.