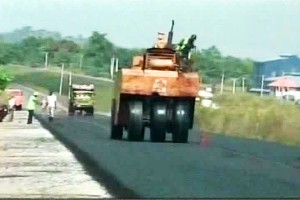 In compliance with the directive of the FCT Minister, Malam Muhammad Musa Bello to repair the Nyanya – Gbagalape road cut off by devastating gully erosion, the road is now motorable and the community is reconnected to the rest of the Territory.

It would be recalled that the FCT Minister, on Friday, February 17, 2017 directed the Satellite Town Development Department (STDD) to make the road motorable within two weeks but the contractor pledged three weeks and today the road is back on track with economic activities picking up.

The Director of STDD, Architect Victoria Imande who took reporters round the project site, restated that it is a new era in the FCT Administration as the promise made is being kept in line with the Change Agenda of the Federal Government.

The Director said that in line with the instruction of the Minister, the contractor was mandated to ensure that the gully erosion is remediated to make the busy road passable before completing the entire road project.

According to her, the main contract is expected to be completed within four months and that her Department would strive to achieve that target within the period.

She reiterated that the ground has been cleared; the base has been removed with all the loose materials carted away and the entire dangerous portions stabilized thereby making the road passable.

The Director emphasized that the Department has successfully salvaged the situation and the contractor can now progress with the work even during the raining season that is just at the corner.

Architect Imande appreciated the support of the FCT Minister, Malam Muhammad Musa Bello and the Permanent Secretary, Dr. Babatope Ajakaiye to get the road this far; promising that they will continue to push the contractor to deliver the job on schedule.

Also speaking at the project site, the representative of the construction firm handling the project, M/S Proportion and Dredge Work Nig. Limited, Mr. Osondu Inya Mbutor assured that the firm would meet up with the timeline given by the FCT Administration.

Some of the residents of the community who also spoke to the reporters (Agada Peter, Wale Ajibode, Hope Kelep and Chief Alenxader Ahile) thanked President Muhammadu Buhari and the FCT Minister for the special attention the government has given to the community.

According to them, they have seen real change in their community and prayed for God to strengthen them.