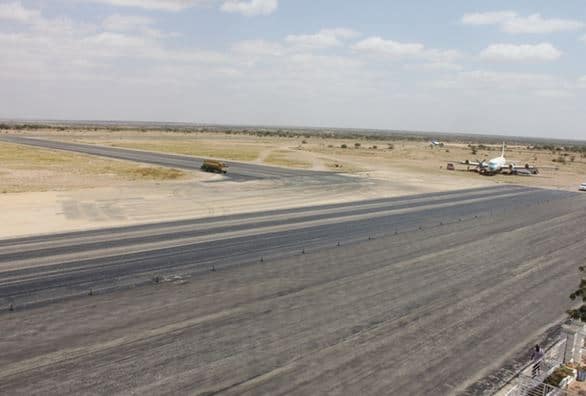 The Federal Airport Authority of Nigeria (FAAN) and Julius Berger, the contractor handling the repair of Nnamdi Azikiwe International Airport, Abuja runway, have said that the work is 40 per cent completed.

The duo gave made this known in Abuja on Monday when members of the House of Representatives Committee on Aviation led by its Chairman, Mrs Nkeiruka Onyejeocha, inspected the project.

Mr Yemi Ayelesan, Resident Engineer, FAAN, told the committee that the hardest part of the work, which is mailing of the 3.6 kilometres runway, had been completed.

He explained that the laying of ‘’fibre glide rubber’’ which prevents water from going deep underground and also prevent runway from cracking has also been completed.

Ayelesan told the committee that the contractors are working to specifications and would deliver on schedule, expressing confidence that the six weeks period for reopening of the airport was feasible.

According to him, the contractors are working round the clock to ensure that they meet the deadline.

Ayelesan said the repair work was a total reconstruction and not partial rehabilitation, explaining that the entire runway had been excavated for laying of asphalt.

He said there were isolated areas that were so bad that required digging deeper beyond mailing and laying of asphalt, stating that the entire surface were mailed to a certain depth.

According to him, there is nothing like partial rehabilitation, even the taxi way is being repaired.

“Laying asphalt does not take time; it is the easiest part of the work.

“The lighting system is the next step, and the cable can be fixed within two days, as things are now, we will start fixing the light cable on March 29,’’ he said.

Dr Lai’s Richter, Project Manager, Julius Berger, said the work was being done in line with the programme of work.

Richter said the fixing of the lighting cable would commence on Wednesday, restating that the runway repairs would be completed before April 19 deadlines.

The Chairman of the House Committee, Onyejeocha, said their visit was to seek explanation on the level of work so far in line with the project agreement.

She also raised concern as to whether the repair work was a total reconstruction or partial repair, urging the contractor to ensure the completion of the project as scheduled.

“We want them to know that Nigerians are concerned and that there should be no extension of the completion date based on the agreement that we have put in place, ’’she said.

The contractors have recorded progress within 19 days since the commencement of work.

The runway was shut on March 8 for six weeks for its total repair and Abuja flights diverted to Kaduna pending the completion of the repair work.