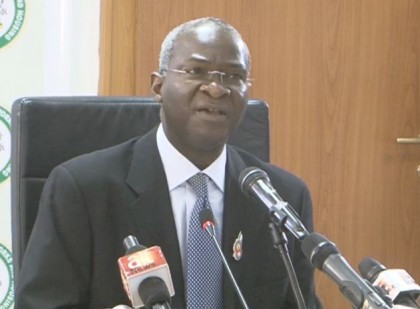 ·      Fashola presides at event, reiterates importance of Nigerians investing in the nation’s economy

The Agreement, which was co-ordinated by the Nigerian Bulk Electricity Trading Plc (NBET), is a key aspect of the finalization of the Power Purchase Agreement which the Federal Government signed with 14 Solar Power developers in July/August last year to deal with any premature termination of the PPA. Afrinegia Nigeria Limited will deliver 50MW while CT Cosmos will deliver 70MW to the Grid on completion.

Making his remarks at the event, the Minister who described the signing of the PCOA as a milestone, again stressed the importance of Nigerians investing locally as a way of supporting the ongoing efforts by Government in rebuilding the country. He noted that experience had shown that whenever the investment weather got stormy and cloudy in the country, it was the persistence, perseverance and indomitable spirit of the indigenous investors that would support Government adding that the moving investors would simply look for calmer investment weather.

According to the Minister, “Sometimes when the weather gets stormy and cloudy, like it has been a few months back, some of the first people to go are the moving investors as they look for calmer weather. It is the persistence and perseverance and the indomitable spirit of Nigerians who have invested in Nigeria that will help to support the efforts that Mr President and the Vice President and the Nigerian Government are making to rebuild the Nigeria that we want to see”.

Thanking the two local investors for their confidence in the nation’s economy, Fashola said the Solar development initiative was in line with the Federal Government’s Economic Recovery and Growth Programme pointing out that one of the five priority actions of the 60 interventions in the Plan was Energy Supply which was the responsibility of his Ministry.

The Minister said the initiative also sat well with the objective of his Ministry to get Incremental Power wherever it was available, safe and environmental friendly adding that it also agreed appropriately with the Global trend in renewables and Nigeria’s commitment as a signatory to the Agreement to seek more sources of renewable Energy and deliver energy “in the way that it sustains the Planet and human life for a more enduring period”.

“It sits very well with our Ministry’s Energy Mix to deliver 30 per cent of our total energy capacity through renewables by 2030”, he said adding, “So it has ticked all of the right boxes; what remains now is to tick the final box to get power to peoples’ homes”.

Recalling a similar ceremony when Government signed the Power Purchase Agreements sometime last year, Fashola, who noted that he made it clear that it was the starting of a journey that could take several months or a couple of years, declared, “We have reached a major milestone in that journey today”.

The Minister, who again thanked the investors and wished them success, assured Nigerians that all of the aspirations to see more renewable energy were being met “with Policy Initiatives, action backed movements”, adding, “The journey has started and the results are imminent”.

He noted that Solar represented only one of the sources of renewable energy that government was currently pursuing adding that there were also hydros and Government was similarly procuring six more hydro dams as well as working in Dadin Kowa, Zungeru and Gurara.

According to Fashola, “We also are very near close to concluding the signing of the contract to commence the biggest hydro plant in Nigeria-the Mambila. So the road to renewables here is really exciting and I am looking forward to seeing what the road will look like in a couple of months”.

The Minister, who expressed the hope that “sooner rather than later” Nigerians would begin to feel the impact of the companies with energy supply especially to communities that were yet to experience and benefit from access to energy, also on behalf of the government and people of Nigeria, thanked the companies for their investment belief and investment commitment.

Earlier in his remarks, the Permanent Secretary (Power), Mr. Louis Edozien, expressed joy at the signing ceremony which he said marked a very important day in the Power Sector describing the event as the last bus stop in the process of getting a grid solar power.

According to the Permanent Secretary, the event represented the last bus stop as the Ministry had, in the last one and a half years surmounted several hurdles leading to the day’s event including getting the PPA signed and getting the projects to financial closure adding that the last bus stop to the Financial closure was the signing of the Put/Call Option Agreement (PCOA)which was the day’s event.

Edozien, who said he would be happy to work with the two indigenous companies declared, “Here we are; this is the last bus stop and we hope and expect that after this, the next stop in the journey will be power on the grid”.

In her remarks, the Managing Director/CEO of NBET, Dr. Marilyn Amobi, also described the day as a very important one for both NBET and the entire Power Sector expressing delight that the process was now at a very high level of conclusion leading to the actual execution of the contract.

Also present at the signing ceremony, which, according to NBET “marks the end of the development stage of Nigeria’s quest to deploy grid solar to the nation’s energy mix” were the Chairman of Afrinegia, Mr Bestman Uwadia who signed on behalf of Afrinegia and his CT Cosmos counterpart, Mr Phillip Chukwueke, who signed on behalf of his organisation. The event was also witnessed by the companies’ international lenders group led by European International Bank and AfDB and also their Engineering Procurement Contractors, AEE Power of Spain as well as their International legal advisory team led by Jones Day Solicitors. While Afrinegia has its solar project at Onyi Kokona LGA of Nassarawa State, CT Cosmos is developing its own project at Panyam, Mangu LGA, Plateau State.