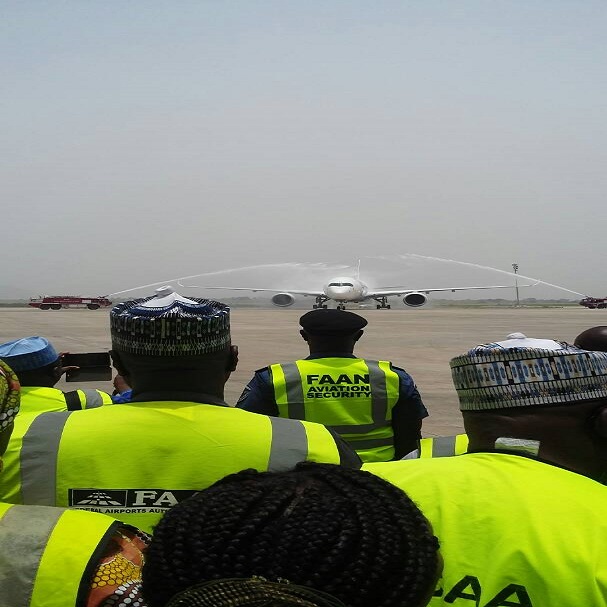 Completion of The Abuja Airport Runway A Clock-Work Precision

The timely completion of the Nnamdi Azikiwe International Airport, Abuja, runway that paved the way for the re-opening of the airport,
after a six-week closure, has shown the ability of the Buhari Administration to rise up to any occasion, irrespective of how
daunting the challenge may be.

In a statement issued in Addis Ababa, Ethiopia, on Wednesday, the Minister described as a remarkable achievement the ability of the
government to complete the total reconstruction of the runway within the stipulated time, despite doomsday predictions.

He said the clock-work precision with which everything concerning the closure of the Nnamdi Azikiwe International Airport and the temporary relocation to the Kaduna Airport was handled by the relevant ministries and the security agencies is the clearest indication yet that Nigeria can tackle any challenge.

Alhaji Mohammed noted that the rehabilitation of the Abuja-Kaduna road by the Ministry of Power, Works and Housing, the provision of
non-invasive but effective security along the highway by the security agencies and the perfect handling, by the Ministry of Transportation,
of the massive logistics involved in ensuring that the Kaduna Airport was able to handle such a large number of flights, all showed that Nigerians have what it takes to make the country a proud member of the comity of nations.

The statement further says it is to the credit of the security agencies and the Federal Road Safety Corps that passengers travelling along the ever-busy Abuja-Kaduna highway were largely kept safe while the closure of the Abuja airport lasted.

There was no known security scare while accidents on the road were kept at the barest minimum, despite the increased vehicular traffic.‎

Indeed, the closure of the Abuja airport runway and the logistic nightmare it triggered must rank among the most intimidating challenges faced by this Administration.

It’s ability to live up to expectation by delivering the project even before the scheduled date has further confirmed that Nigerians elected a responsive, responsible and capable federal government in 2015 Lai Mohammed maintained.

The Minister reminded those who might want to trivialize the feat that what could not be done, in the over 30 years that the Abuja airport runway was left to deteriorate to the level of near failure, was achieved in just six weeks by a determined Administration even under an economic recession.

He also recalled that the Port Harcourt International Airport was closed for almost two years, a shameful development, at a time the
country was witnessing a more favourable economic situation.

Lai Mohammed thanked Nigerians for enduring the inconveniences that came with the relocation of Abuja flights to Kaduna, the Ethiopian
Airline that operated its scheduled Abuja flights to Kaduna when other international carriers turned their back, and the Julius Berger construction company that worked day and night to deliver the project before schedule.

The success recorded in the timely reconstruction of the Abuja airport runway can only rank next to the determined effort with which the federal government contained the Boko Haram insurgency.

We assure Nigerians that this Administration is employing the same uncommon determination to tackle all the challenges facing the country, including pervasive corruption, insecurity, unemployment, infrastructural decay as well as the general economy.‎