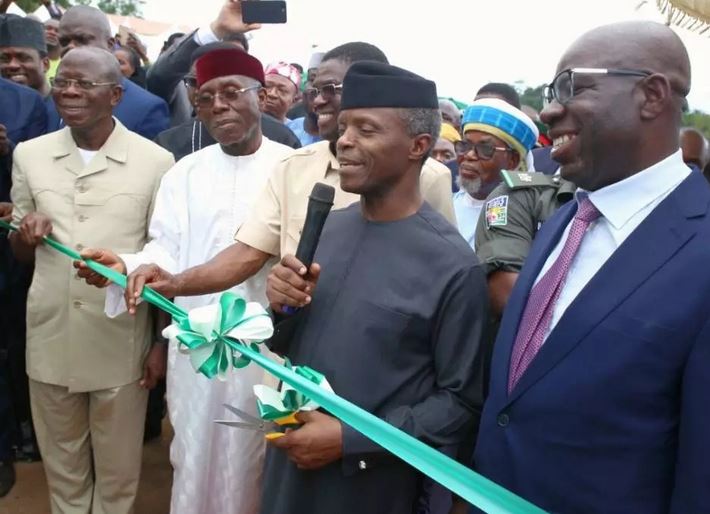 The Cement factory is set up and owned by the BAU Groups Cement Manufacturing Company. The Group has 3 major subsidiaries and plants in Northern and Southern Nigeria as well as a 2 million metric tonnes per annum floating terminal serving niche markets.

“I am extremely proud to be a Nigerian and I’m sure that several of us here are. This is a wholly Nigerian enterprise and we know that the planning, the execution and successful establishment of this industrial complex was done by a Nigerian and by a Nigerian team. It is really good to know.

“The construction of this plant, is of course a big boost, to the Nigerian economy, it means thousands of direct jobs and indirect jobs, both for skilled and un-skilled workers, from the commencement of the works to the current smooth-running of the production process.

“As a matter of fact, we are told that production is on now and there is no dust, no noise, it is all just working so very well. This, I think, is just an amazing thing indeed.

“At the level of production already attained, it also means a consolidation of Nigeria’s self-sufficiency in cement and a big boost to our export capacity.” The Vice President said.

Osinbajo said: “As noted by the chairman himself, Alhaji Abdulsamad Rabiu BUA, during a visit to my office on July 7, 2017, he spoke about two factors which he thought would bring down the cost and availability of cement in Nigeria.

One of those was the currency exchange rate and, of course, it was completely correct to say that as our currency improves and stabilises and we see a reduction in the price of low pour fuel oil, it is inevitable that production cost and market price of cement will come down to a level that is within the reach of many more Nigerians.”

According to him, the construction of the power production facility for the plant, the BUA Group has used the most modern and efficient gas turbines which combines low and economical running cost with a very high degree of reliability, which he said This met the expectations of the government.

“In the Economic Recovery and Growth Plan which was launched by Mr. President on the 5th of April, 2017, he made it clear that Nigeria’s economic emancipation and growth must be private sector led and driven. There is simply no public sector resource that can match the resources and commitment of the private sector.” He said.

Osinbajo emphasized that there is no way a country will grow without the active management and participation of the private sector.

“As a government, we are committed to creating an enabling environment and eliminating the bottlenecks that impede innovation and market-based solutions.” He said.

The number two citizen seized the opportunity to reassert the determination of the Buhari administration to continue with what he described as enabling business environment, while going the extra mile to directly assist the private sector in steadily growing the Nigerian economy.

He said the Federal Government is working very hard with the Industrial Policy Council, of which the chairman of the BUA Group is a prominent member, to evolve and implement well considered solutions to business impediments and economic stagnation in Nigeria.

“Again, I must commend the Edo State Government under His Excellency, Governor Godwin Obaseki, and the former Governor of Edo State, Adams Oshiomole. Your business friendly policies and your preparedness to back private sector initiatives is an excellent demonstration of how to grow the economy and create worthwhile jobs in the process.

“Your Excellency, Governor Obaseki, I must commend you for diligently building on the commendable work of Governor Oshiomole. This is how great societies are built.

“Last but not the least, I want to congratulate my brother and friend, Alhaji Abdulsamad Rabiu, as well as the management and staff of the BUA Group for this remarkable achievement.

“Abdulsamad, you are numbered amongst individuals in Nigeria who are properly described as entrepreneurs; men and women running value-adding, job-creating enterprises using local resources and talents to create value and wealth.

“The world’s greatest economies attain significance by the contributions of major entrepreneurs such as yourself. It is not by those who describe themselves as businessmen, but are in fact just rent seekers.” Osinbajo said.