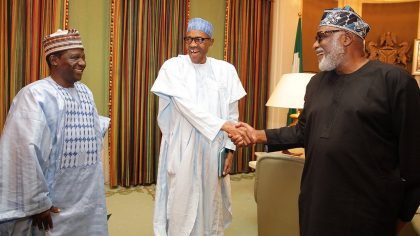 Gov. Rotimi Akeredolu of Ondo on Tuesday called on the Federal Government to take advantage of the natural resources in the state by establishing deep seaport in Ondo.

Akeredolu made the call when he fielded questions from State House correspondents after a closed door meeting with President Muhammadu Buhari in the Presidential Villa, Abuja.

“We are asking that the country takes advance of the natural resources in Ondo State and we have a seaport that is very germane to our export activities in particular, our mineral deposits which we have in large number and then we need to have a deep sea manning port and Ondo states well suited for it.

“So we impressed this on Mr. President on what we believe will be a lasting legacy if we are able to accomplish it in his own time.” he said

Akeredolu said that the seaport, if operational, would cater for the volume of mineral resources meant for export across the country.

He said: “No, you just look at the volume of natural resources that we are exporting through any port in Nigeria.

“The total volume which is still not so high, the moment it gets high we will need a deep seaport where we will even have a modern ship berth.

“We do not have anywhere in this country today where big ship can berth, not in Lagos or Calabar.

“That is why what you see is that so many of the ships will berth in the high sea while the smaller ones will be used to take the goods there or bring the goods from the ship. And that is why we need a deep seaport where the biggest ship in the world can berth and that is Ondo State.’’

Gov. Willy Obiano of Anambra, who also met with the President, urged the Independent National Electoral Commission (INEC) to be unbiased to have a free and fair gubernatorial election in the state.

Obiano made the call when he spoke with State House correspondents at the Presidential Villa, Abuja, after a closed door meeting with President Muhammadu Buhari.

He assured that all the necessary measures were being taken to guarantee peaceful election, adding that he was confident of winning the election.

“Anambra remains the safest state in Nigeria today; we don’t have cases of kidnapping, armed robbery or similar crimes.

“We have been firmly in control of that State and will continue to do so throughout my tenure as governor.

“I’m very confident that I will win the forthcoming election with a landslide. All we want is for the empire to be unbiased. “A free and fair election is what we want and we will get the result,” he added.

Obiano, who described his meeting with the president as “very fruitful’’, said “the President likes governors who are delivering dividends of democracy to their people.

“He likes governors who work hard; who are delivering what people can see and are delivering dividends of democracy to their people. That is what the president wants.’’(NAN)