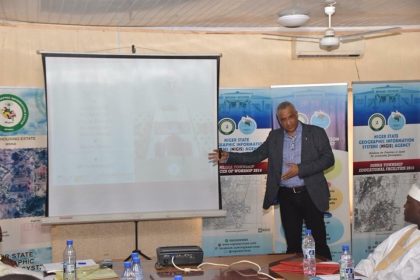 It will be recalled that the Governor led the state’s team early this year to United Arab Emirate, at the World Council on City Data Conference.
The Governor’s impressive presentation won for Minna, an international accolades and gaining recognition as a local data centre with the World Council on City Data and chosen as a regional Centre of Excellence.

The project titled “UnSlumming Minna” will build on earlier success recorded in the regularization of informal settlements, also pioneered in Minna at the Koton Kashew area.
This project will focus on Gidan Kwano Students Village an informal settlement opposite FUT Minna’s main gate.
It will employ a methodology known as 4P (Public-Private-People-Partnership), which has been developed by NRCN at the center for Spatial Information Sciences (CSIS), Ahmadu Bello University Zaria.

Goal 11 of UN sustainable Development Goals (SDG) is to; makes cities inclusive, safe, Resilient and Sustainable’. This is the ultimate goal of the UNSLUMMING MINNA Project.

The project started today with a stakeholders workshop, at the offices of NIGIS, Minna.
It was attended by people from all sectors including community members from Gidan Kwano.
The Project will be run for six months and will provide Niger state Government with a template for reducing the spread of slum settlements.