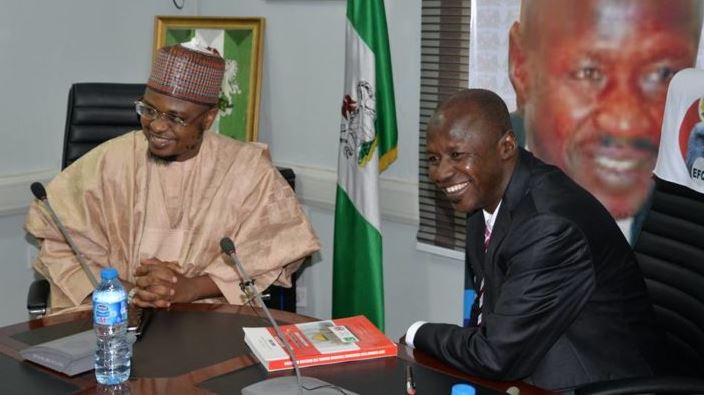 The National Information Technology Development Agency (NITDA) has recently cleared the ICT Security and Systems Infrastructure Upgrade project of the Economic and Financial Crimes Commission (EFCC)/Nigeria Financial Intelligence Unit (NFIU) through its commitment as the government’s clearinghouse for all IT procurement and services in the public sector.

In an effort to strengthen the IT Projects Clearance process, Dr Isa Ali Ibrahim Pantami, FBCS, the Director General/CEO, sought for the support of the EFCC in order to sustain its fight against corrupt practices in IT procurements of Government Ministries, Departments, and Agencies (MDAs). Mr Ibrahim Magu, the EFCC Acting Chairman/CEO, pledged the Commission’s support and indicated that they would comply with government’s directives on obtaining NITDA’s clearance for the Commission’s IT procurements and services.

The Commission fulfilled this pledge by subjecting its ICT Security and Systems Infrastructure Upgrade project to rigorous scrutiny by NITDA’s IT Projects Clearance Committee. By this singular act, the EFCC has shown that it is not above the law thereby serving as an example to other government establishments.

It may be recalled that President Muhammadu Buhari, GCFR, has called for strict compliance to the IT Project’s Clearance directive by all government establishments. He made this declaration at the opening ceremony of this year’s e-Nigeria International Conference and Exhibition held from Tuesday 7th to Thursday 9th November 2017. He also used the event to commend the Agency’s efforts at enforcing Federal Government’s directive on ensuring that all ICT projects are cleared before they are implemented.