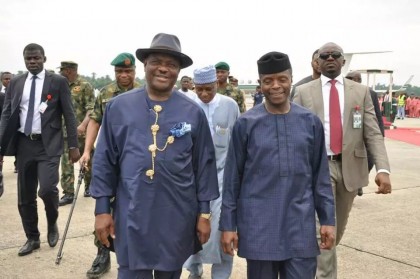 VP Osinbajo And Governor Wike During His Visit to Rivers state

The Vice President, Professor Yemi Osinbajo Has called on the people of Niger Deltans to embrace peace as a panacea for Infrastructural developemnt of the region. This he stated at the on going tour of the region to meet with the stakeholders and interact with the Oil producing communities. In the speech released by His Special Adviser on Media and Publicity, Laolu Akande said the Vice President began the tour from Gbaramatu Kingdom in Delta State.
Below is the full speech;
Vice President of the Federal Republic of Nigeria, His Excellency, Prof Yemi Osinbajo, SAN, GCON, started a series of Interactive Engagements with oil-producing communities on Monday January 17 in Gbaramatu Kingdom, Delta State
HERE IS HIS SPEECH BELOW:

I am here today as an emissary, a messenger of our president, President Muhammadu Buhari, President of the Federal Republic of Nigeria, and Commander in-Chief of the Armed forces of this nation.
Read Also;  VP Osinbajo Commences Series Of Interactive Engagement With Oil-Producing Communities

I am also here as a citizen of our country, and to you the great people of Gbaramatu Kingdom.
Earlier today, I had the privilege  of meeting with his royal majesty, the Pere of the Gbaramatu Kingdom and his chiefs and l was received very warmly (and all that  is left is that l have not been offered a chieftaincy title but l intend to take it shortly.)
I have come with a message for the people of the Gbaramatu Kingdom and the people of the Niger Delta as a whole .
It is a short message, it is and l quote “that we must prepare for the future.”
Read Also; We have to completely delegitimise corruption- VP Osinbajo
The Niger Delta that we see today including this great kingdom is an area of poor infrastructure, few schools, few hospitals  and a severe  pollution, as Niger Delta of today is one of daily pipeline vandalization.
In 2014 alone, there were over 3,700 incidents of pipeline vandalization, from January to June 2016, there were over 1,447 incidents of vandalization.
The Niger Delta of today is one  where aside from environmental degradation, between 1998 and 2015, over 20,000 persons have died from fire incidents arising from breaching of the pipelines.
The city is poor and thousands have health challenges especially as a result of environmental pollution.
The Niger Delta  of today, anywhere you go, there are signboards of proposed infrastructural projects mostly uncompleted and many are simply abandoned.  Many of the initiatives , if you check, the story has not been able to make the big changes required.
From the Niger Delta Development Board in the 60’s, the OMPADEC, the NDDC, & the Amnesty Programme, many of these projects have not been able to meet the objectives that were set for them.
The status-quo of Nigeria, years of official neglect, corruption and  malfunction of oil companies have yeilded a massive  whole pain till today.
But my message to you today is that it is time to prepare for the future. Our future is not a future of environmental degradation, poor infrastructure, it is not a future of no roads, harrassment.
It is a future of progress & development.
Read Also; News Summary 17th Jan 2017; VP Osinbajo Meets Niger Delta Stakeholders
Unfortunately there is no time because the future is already here, every citizen should  ensure that  the future is not worse than today and to prepare for a great and promising future of the  Gbaramatu Kingdom and the people of the Niger Delta  as a whole.
Now, 3 things must happen and l want you to follow me closely:
1. We must  also recognise that the Niger Delta is a special place , a special economic zone for this nation and so must be treated as a special development zone .

2. We must recognise a unique environmental and daring challenges of Niger Delta.

3. The third  thing that must happen as we prepare for the future is to realise that the future is full of challenges  for the oil industry

SPECIAL DEVELOPMENT ZONE
Long ago at the Willinks commission, it had been acknowledged that because of the peculiar environment of the Niger Delta, and the profound challenges, it should be treated as a special development zone.
And l agree entirely that this zone has to be treated as a special development zone,  but what does this mean in practical terms ?
It means that the Federal Government , State Government and the National Assembly  representatives alongside NDDC and the Civil Society representatives of the  Niger Delta  people must sit together and develop a plan and concrete arrangements for  development of the Niger Delta.
There is  no excuse for not planning together , the Federal Government alone cannot solve the problems of the Niger Delta just as my dear brother President of the Ijaw Youth Council  said.
It is impossible for Federal Government alone, but we can with the State Government in this delta region , National Assembly members and Civil Society Organisations plan for this special development zone and make sure that they carry it out and they deliver on  the promises that we have  made to the people.
The State Government should also be prepared to devote substantial portions of there budgets to this special projects.
The PANDEF have submitted a concise list of 16 dialogue issues that will be extemely helpful in ascertaining  the key development  priorities. That bounded document is an important working document.
It is a  document that shows what is required to be done and in every sense the document  is an excellent roadmap for the future of the Niger Delta  region.
We must also hold some of the international oil companies to the agreement to host communities relating to development of those areas . We must ensure that in the future, in commercial  opportunities  rising from oil exploration  activities, pipelines supervision and other such contracts should  favour host communities.
We must promote indigenous participation of oil companies. Some  oil companies have the excellent ideas of giving out ownerships to there host communities.
The critical issue is infrastructure, roads, rails, hospitals  and schools .
In the 2017 budget  we have provided  for  the commencement of the Lagos-Calabar rail way, the coastal railway which  will go through  the Niger Delta . We are doing  this with the Chinese.  We will be visiting Kurutie, the  site of the Maritime  University.

The President has directed the Ministry of Petroleum  to work  quickly to see the  realisation of all of the objectives  in implementing this crucial  educational institutions.

All of these, and everyone of them are listed  in the bounded 16 dialogue issues projects that will benefit not just  the Gbaramatu Kingdom and the  entire Niger Delta.

But the issue is how to finance, there must be resources and revenues and if the revenues does not come we are deceiving ourselves  and we are telling ourselves stories. Revenues can only come when we are sure that there is peace, this is the  way of the obvious and l do believe that  this must come with  justice, legal justice itself  is needed for these to be effected.

l look forward to all that has been said and all that the Youth Council have said.

His royal majesty also assured me that there is a commitment to peace, a  committment to ensuring that we are able to make progress and all the revenues that will bring  to fruition those things that we have promised and those things that are contained in the bounded document.

The second thing that must happen in other to ensure that we prepare adequately for the future is the clean- up of environmental  degradation  of the entire  Delta. The Ogoni clean-up has already been  flagged off and an implementation  committee is in place.

For the clean-up not to be a waste of  money,  we must enforce strict  environmental  standard for the oil producing companies including  regulatory  commitments  on gas  glaring and all our communities  must prevent vandalization  which is also a major source  of environmental degradation.
FUTURE OF OIL

The third  thing that must happen as we prepare for the future is that the future is full of challenges  for the oil industry. And we must  recognise  that  in another 20 to 30 years our oil will not be as precious as it is today  and that is reality.

America has stopped  buying oil from us. All the countries in the Asia that buy oil now are developing  alternative sources of power, China and Japan are developing  electric cars. Infact Japan now has more charging stations than petrol stations  everywhere. Solar power & other various sources of energy are getting cheaper.
We must be smart, we must act intelligently  and act in time.
We have a window of opportuniy, we must use our oil to develop  our people.

This Kingdom, a place like this should not be just like this, it should be better, it should  look like Dubai or anywhere in the very developed countries in the world .  It shouldn’t  look like this, I am not satisfied but we cannot  change unless we recognise that  we only have a window of opportunity, may be 20, 30 years.

If we don’t take that window of opportunity  we will spend that windows toying with  ourselves.I pray we will work together to  make sure that we are able to  deliver for the future, & for all of our people .
CLOSING

To my brothers  in the Ijaw Youth Council , I have heard you and l will take your message back to Mr. President. You have spoken well.

The first responsibility  is ensuring  peace, development  cannot rise without  peace, the world is moving quickly, we must not waste time.

This part of the nation is important to  Mr. President,  every word that he says, l believe  him because  he is a man of his words  and I am assuring you that he is completely  committed to ensuring that  there is justice  in Gbaramatu Kingdom, justice  in the Niger Delta , peace and progress  in the Niger Delta region. Thank you