“We expect no delays” 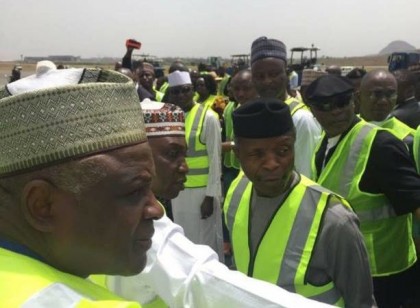 During an inspection tour of the Nnamdi Azikiwe International Airport earlier today, Vice President Yemi Osinbajo, SAN, expressed confidence that the airport would soon be open again at the scheduled time, April 19.

He spoke with reporters during the tour and below is a verbatim report of the exchange:

Q: What are your observations after the tour?

I have looked round and I think that what I’ve seen and also from the information from the contractors, from the consultants, things are going very very well.

We are told that we are nearing completion and we are clearly on schedule and we expect to see that this will be completed well on schedule. I don’t think we should expect any delays whatsoever.

We have assurances from the consultants that we are clearly on schedule, so by the 19th of this month, a new runway should be settled.

Q: Do you have any reservations?

The contractors are doing 24 hour shifts, working round the clock. I think they have taken the job very seriously and we expect to see that this will be done and completed by the 19th as they have promised.

VP: FAAN has said it is already starting to do something,…they say they have started to do some work.

(The Vice President, right after the chat with the media, then went to the terminal side, to inspect a new lift being constructed at the Domestic wing. This means passengers would no longer be limited to the stairways in making their way through from check-in to boarding)