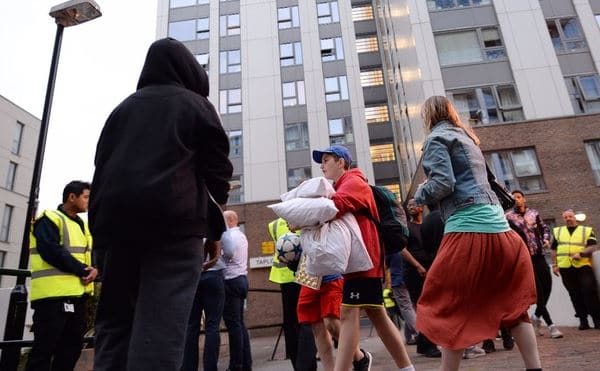 After the Grenfell fire outbreak in London, some 650 homes were evacuated overnight from four north London tower blocks to allow for urgent fire safety work to be done on the buildings, a local council said Saturday.

The high-rises are located in the borough of Camden’s Chalcots Estate, where inspectors determined the exterior cladding posed a fire risk.

The cladding on the buildings is similar to that of west London’s Grenfell Tower, where at least 79 people died last week when a fridge-freezer sparked a blaze that consumed the building. The covering was blamed for accelerating the spread of the fire.

When the Camden Council announced the immediate evacuations at Chalcots Estate late Friday, it put the number of affected households at around 800.

The figure was later revised down to 650 after fire inspectors excluded one of the five towers from the evacuation.

Some residents had been provided new accommodations, while others were staying at two rest centres or with family members. Renovations are expected to take several weeks.

Police, fire crews, the British Red Cross and other volunteer group helped in the evacuations. The council called the operation “unprecedented in scale for Camden.”

Many of the estate’s dwellers have raised concerns about fire safety issues in recent days, and once again pressured borough authorities on the subject at a meeting on Thursday.

Six people who sustained injuries in June 14 Grenfell Tower blaze remain in hospital, with two in critical condition. The fire was the deadliest in Britain since World War II.