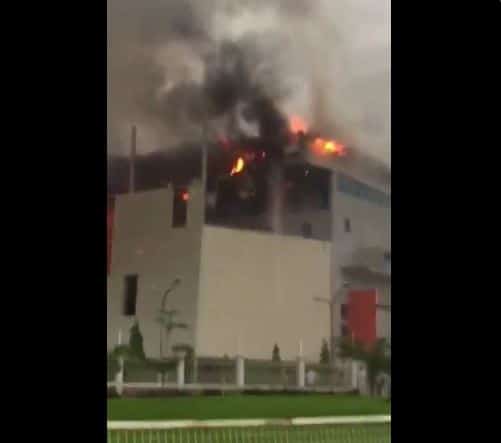 Fire Out Break At House On The Rock Church

Fire broke out on Sunday at the House on the Rock Church in Abuja. The church is located close to the National stadium Abuja and close to the City Gate.

Reports says that the building was visibly ablaze while fire fighters were struggling to put out the flames. The cause of the fire is yet unknown.

A member of the Church who spoke to the press said that the main building had not been in use for a while now as renovation work was going on.

Mr Joseph Peter who sounded sad said that he just left the church at about 1:00P.M. Sunday afternoon after the day’s service and all was well.

According to Assistant Commissioner of Police (ACP) Abayomi Shogunle, head of the Public Complaint Rapid Response Unit (PCRRU), there were 7 fire-fighter trucks at the church premises trying to put out the fire. Shogunle also tweeted a video of the burning church.

House on the Rock Church, Abuja on fire 🔥. 7 fire trucks 🚒 at the scene.
Caution needed if you are driving towards Airport, cause unknown. pic.twitter.com/zKIRikIOZN

The ministry was established to be a vanguard 21st century Church with a vision of empowering believers for the fulfilment of their God-ordained destinies.

Since its’ inception the Church has grown far beyond the borders of Lagos, with over 40 daughter Churches and missions in Nigeria and across the globe.

The Abuja Church popularly called “The Refuge” by church members was formed in 1999 as a springboard for strategic ministry in the northern region of Nigeria and beyond.

The Church is popular for organizing and hosting the The Experience Lagos music and worship concert, which has brought several International music Artists to perform in Nigeria.