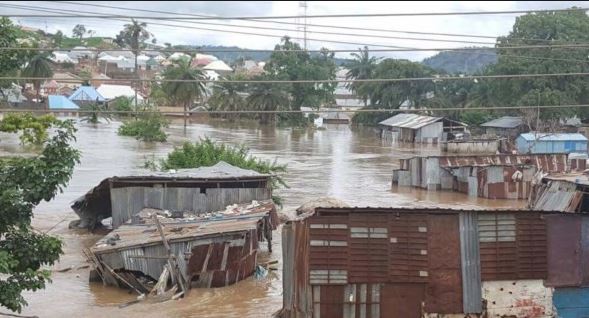 The Chairman of Suleja Local Government of Niger, Malam Abdullahi Maje, has confirmed 10 persons missing and two bodies recovered in flood in the area on Sunday.

Witnesses had said that eight members of a family were suspected to have died in the flood which affected Suleja and Tafa local Government areas of Niger.

The head of the household was said to have survived but his  two wives and six children were not lucky.

The New Agency of Nigeria (NAN) reports that many families were affected with household effects floating in the water.

Many people struggled to bale water out of their houses.

Mr Mohammed Mohammed, the District Police Officer in-charge of Division ‘A’ Police station in Suleja, could not confirm the casualty figure but said his men had visited the flood scenes.

“The flood affected many people who built their houses along the river bank; many houses have been destroyed with unconfirmed number of deaths recorded.

“Police are providing security around the scene so that hoodlums will not cart away victims’ property especially those lying outside,” he said.

He promised to furnish more details on the incident.

The National Emergency Management Agency was not also able to give  details.

Meanwhile, Malam Abdulkareem Samanja, the Village Head of Hayin Nasarawa-Iku in the nearby Tafa Local Government Area decried the loss of property.

He said he was still awaiting report from ward heads on the incident.
At Suleja General Hospital, Musliu Mohammed, a 17 year-old boy, recovered from the flood and brought into the hospital by sympathisers, was placed on admission