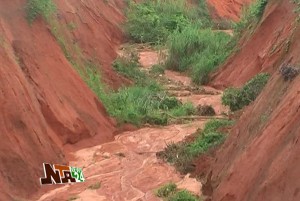 The Hope Democratic Party (HDP) in Anambra has called on the state government to embark on massive intervention works at the erosion sites across the state.

Chief Sam Oraegbunam, Chairman of the party in the state, made the call in an interview with News Agency of Nigeria (NAN) in Awka on Monday.

He said that the government was not doing enough to address the menace of erosion which, he added, had rendered many homeless, while endangering properties.

NAN recalls that the Commissioner for Environment, Dr Romanus Ejikeme, recently said that there were not less than 600 active sites, out of the about 950 geo-referenced erosion sites in the state.

He then said that the state government, within the limits of resources available to it, was carrying out intervention works on 10 sites.

NAN, however, reports that the Anambra Government has paid N1 billion as counterpart fund for Nigerian Erosion Watershed and Management Project (NEWMAP) intervention work in the state.

However, Oraegbunam urged Gov. Willie Obiano’s administration to follow up on the payment made on the World Bank-assisted project and ensure that the people of the state got value for it.

“It is a known fact that the South East zone is erosion-prone and Anambra is a state at great risk, just as the state government has been telling the world.

“The problem is that out of the numerous erosion sites, government says it is only working on 10 of them, that is to tell you how pitiable the situation is because no tangible work is being done at the sites.

“When compared to the enormous resources put into the erosion issue in Anambra through NEWMAP, it shows that there is still a lot to be done.

“Government should also empower its agencies to clear the drains and increase the citizens awareness on how to curb erosion; these can aid efforts to tackle the menace,” he said. (NAN)