Fashola Pushes For The Development Of A National Digital Map 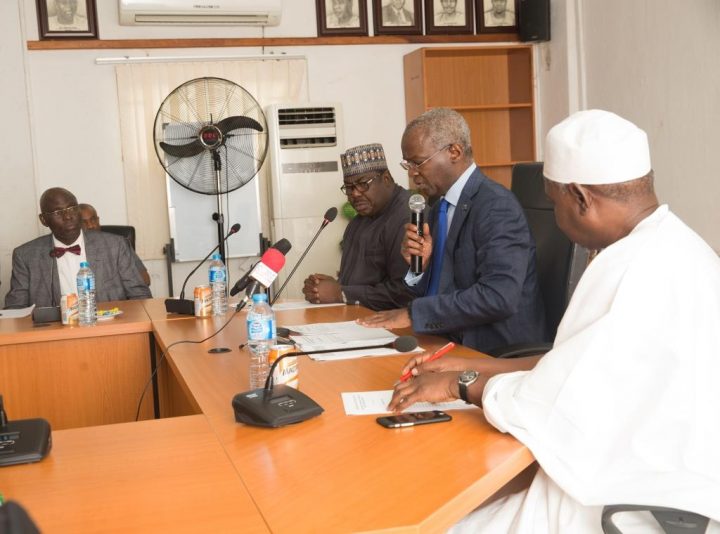 The Minister of Power Works and Housing, Mr. Babatunde Fashola SAN, Tuesday in Abuja advocated the development of a National Digital Map for the whole country saying aside enhancing internal security, the electronic map would benefit weather forecasts , agriculture and internal transport systems.

Fashola, who spoke in Abuja while swearing-in the President and nine other members of the Surveyors Council of Nigeria (SURCON), said there was need for all the state governments in the country to come together to strategize on how to raise funding and digitalize all the mappings of their territories adding that the mappings would then form the basis for the National Digital Map.

He said the success of the Economic Recovery and Growth Plan, recently launched by the President, would depend significantly on the work of the Surveying profession for the revival, development and sustenance of the economy as well as launching it into global competitiveness.

The Minister said the need for states to digitalize all the mappings of their territories had become expedient because of the importance of the exactitude of the science of Surveying not only to national security but also to the safety of life and properties, adding, “But beyond security is the fact that the Economic Recovery and Growth Plan has as one of its pillars the development of our infrastructure, the development of Energy”.

“It will be easier to then read all the maps that we carry on our phones because they are local and domestic coordinates and data”, Fashola said adding that going digital would also help avoid wrong targeting in surveying as a result of wrong coordinates or wrong interpretation.

Stressing the importance of security in creating a stable economic development, the Minister added, “We have had in some parts some errors made in targeting which sometimes may not be unconnected with wrong coordinates; or if they are not wrong co-ordinates then improper interpretation”.

Still on the importance of surveying to the economic growth of the country, Fashola said in terms of the nation’s infrastructure such as roads and bridges, railways and the Housing projects, nothing would have been done without the input of the Surveying profession citing the example of the National Housing programme now going on in the 33 states of the country.

“In each of the 33 housing sites where construction is going on now, we couldn’t have started work without a survey plan, because it is from the survey plan that we created a layout plan and it is from the layout plan that designs that were created were then imposed and building could start”, he said adding that none of the highways currently being constructed across the country could have started without a right-of-way.

Fashola, who also said the same impact of surveying also applied to transmission lines, transmissions stations and so on, however, expressed the commitment of the Government to supporting the Council to facilitate its function adding, “I think that the Surveyor-General himself will be the first testimonial to say that since the Buhari administration the budgetary provision of this department has been quite expanded and will hopefully be sustained”.

On the role of the Council, the Minister declared, “What this Council is supposed to do is really to regulate the practice, the trade and profession of Surveying; decide who and who are eligible to practice it, under what conditions and so on and so forth”.

“So you have an onerous burden of leadership. It is not made easy by the fact that, as the Surveyor General has said, it is an ubiquitous profession; ubiquitous in the sense that it is so highly impacting; and in these days of Digital Mapping, global security challenges, your responsibilities are not made easier at all”, he told the members.

The Minister conveyed to the Council the felicitations of President Muhammadu Buhari, who, according to him, “charges you to discharge your statutory responsibilities without fear or favour and with your very best endeavours in accordance with the oath of allegiance that you have sworn”.

Wishing the Council success in the “Challenging task” before it, the Minister declared, “Let me say in closing that in constituting this Council we are appointing leaders to solve problems; we are not appointing leaders to create problems and I think what I have not said there has said itself”, adding, “I hope that at the end of your tenure of service, the President and Commander in Chief will be able to give you a very warm handshake of congratulations”.

In his response on behalf of the members, the newly inaugurated President of SURCON, Surveyor Joseph Olorunjuwon Agbenla, pledged that the Council, under his watch, would discharge its responsibilities to the best of their ability adding that the Council members would not create problems for Government but would rather solve problems.

Earlier in his welcome remarks, the Surveyor General of the Federation, Surveyor Ebisintei Awudu, stressed the importance of the Surveying Profession pointing out that the Federal Government’s diversification drive in restructuring the economy, National security, National Sustainable Development would not achieve the desired result without the input of Surveying Profession.

He pledged the determination of his office, which, according to him, “is the nation’s apex Mapping Office which coordinates the activities of Surveying and Mapping”, to partner constructively with SURCON in the areas of leadership, research, policy and strategy formulations for better services to Government and the citizens of the country.

Also present at the occasion with the Minister were the two Ministers of State in the Ministry, Hon. Mustapha Baba Shehuri and Surveyor Suleiman Zarma Hassan, Acting Permanent Secretary Works and Housing, Mr Ibrahim Tumsah, Directors and Special Advisers in the Ministry while on the SURCON side, were the representatives of the Military, Tertiary Institutions and Women in Surveying among other representatives and other SURCON members.