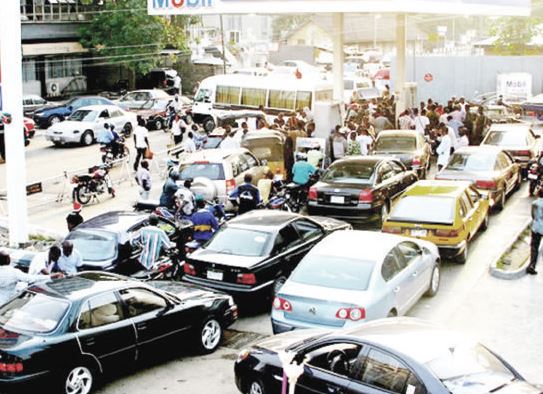 Many motorists spent the night at filling stations in Jos queuing for petrol as the fuel scarcity bites harder in the Plateau State capital.

The News Agency of Nigeria (NAN) correspondent monitoring the fuel supply situation in Jos on Wednesday reports that there are long queues at NNPC and Mobil stations selling the product at N145 regulated price.

NAN reports that there were minimum queues at other independent marketer’s stations selling at N190 a litre.

An official at one of the filling stations selling fuel, who preferred anonymity, said that as at 7 a.m. that no fewer than 80 motorists were on the queue at the station waiting for the commencement of sales.

“We have issued over 76 motorists with the stations stamped and numbered tickets to access the station as soon as we open sales,” he told NAN.

NAN reports that the NNPC mega station on Murtala Muhammed Way was besieged by motorists who queued for about one kilometre from the station.

Dadel Mangut, a motorist on the queue, told NAN that he did not mind the wait as the queue moved fast.

“Other stations sell-off their fuel to black marketers at night where a gallon of petrol now sells at N1, 200.

“They see this as an opportunity to make money for the Christmas season,” he said.

Bagas Samuel, another motorist at Mobil, told NAN that a lot of people slept in the queue to ensure they got fuel at the right price.

Ceaser Douglas, Operations Controller, Jos Office of the Department of Petroleum Resources (DPR), however, told NAN that the situation would soon return to normal as stations have started receiving supply.

He said that sales were going on in an orderly manner at stations that he supervised just this morning.