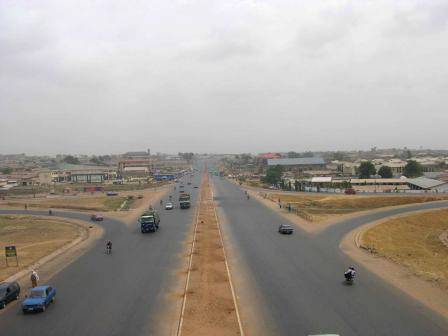 Turaki Hassan, Abuja: Speaker of the House of Representatives, Hon Yakubu Dogara, has given hint that a major road project from the North East zone to Abuja in the North Central is in the works.

He stated this when he paid a traditional homage on the Gangwari Ganye, Alhaji umaru Adamu Sanda, at his palace in Ganye, Adamawa State.

He told the Emir that work will soon commence for a road project from Adamawa through Gombe to Bauchi, Plateau, Benue and terminate in Abuja.

“We are working on a major dual carriage way from Yola to Abuja, cutting through Gombe, Bauchi, Plateau and Benue states respectively . The project will help open up a lot of communities and enhance the sociology-economic activities of the inhabitants of the zone,” he disclosed.

The speaker also disclosed that the sum of 500 million naira has so far been appropriated for the reconstruction of Mayo-Bella, Jada, Ganye-Toungo road in 2017 appropriation Act.

“Today I have witnessed the challenges that the people of this area face in terms of road infrastructure. I can confirm to you that the sum of 500 million naira has been appropriated, though not adequate for the job, but at least is enough for the commencement of the project. I am aware of the procurement process.

Speaking on the North East Development Commission Act, the speaker noted that the agency when fully established, will provide opportunity to channel resources to address developmental and security challenges in the area.

Dogara, who was in Ganye for the turbaning of the chairman of the House Committee on Media and Publicity, Hon. Abdulrazak Namdas, as Gangwi Ganye and also to commision his constituency projects, emphasised the need for constituents to return performing members, describing Hon. Abdulrazak Namdas as a hard working lawmaker who deserves the support of his people for more terms in the National Assembly.

Speaker Dogara, noted that constituencies that return their representatives to the parliament stand the good chance of producing principal and even presiding officers in the National Assembly.