Internet users in Nigeria increase marginally to 100.2m in January

Internet users in the country increase to 100.2 million in January, from 98.4 million in December 2017, the Nigerian Communications Commission (NCC), has said. 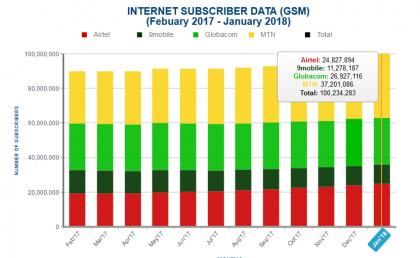 The NCC made this disclosure in its Monthly Internet Subscribers Data for January 2018 on its website on Tuesday in Abuja.

The data showed a marginal increase of 1.9 million new subscribers in the country.

NCC said Airtel, MTN gained more internet subscribers during the month in review, while Glo and 9mobile were the big losers.

The breakdown revealed that MTN gained the most with over 1 million new internet users increasing its subscription in January to over 37 million from 36 million recorded in December 2017.

It said Airtel also gained 84, 269 new internet users in January amounting to about 25 million users as against about 24 million users in December 2017.