The residents of Odo Alaamo, Ogbomosho in Oyo state, on Wednesday expressed delight at the intervention of the Federal Government in the control of erosion and flood, which had ravaged the community for over forty years. 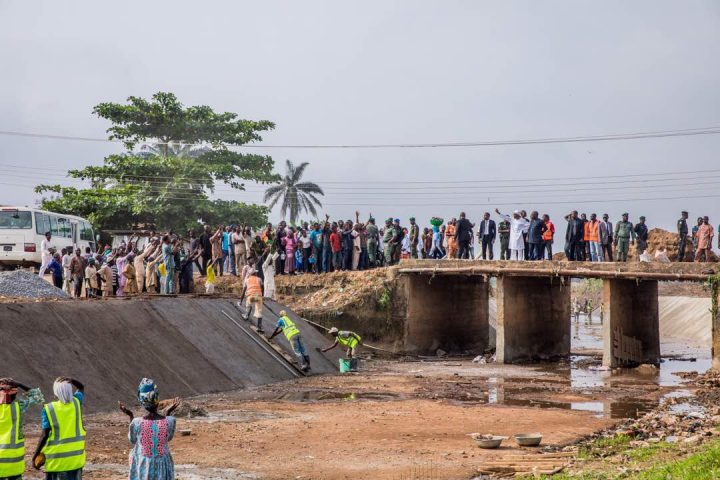 Some of the residents, who spoke with the News Agency of Nigeria (NAN), in Ogbomoso at the inauguration and official handing over of the completed flood channel works commended the government.

The Minister of State II for Power, Works and Housing, Alhaji Suleiman Zarma on behalf of the Federal Government inaugurated the project in Ogbomosho.

NAN reports that over the years, the community dwellers had suffered loss of property and lives including children and adults due to the great flood experienced in the locality in the past.

Alhaja Taiwo Aremu expressed joy for the intervention of the Federal Government, adding that the pains the villagers had nursed for over forty years of the ravaging flood had been placated.

“I grew up to meet the flood any time it rains, many children including adults have been victims in the past. We have also lost huge property to the flood.

“Most times the loss occurs in the night when it rains heavily and flood will take over the buildings sweeping away our belongings including human beings.”

She said that the problem was also devastating during the rainy season as the area could hardly be accessed due to erosion.

Majolagbe appealed to the Federal Government to replicate the same gesture to other communities in desperate need of such intervention, especially those located in riverine areas to prevent loss of lives and property.

Mr Adebayo Salami, another resident, told NAN that the flood and erosion control would make meaningful impact on the community.

“I can recall the cries of people whenever they lose their belongings to the flood.

“Though, the intervention has been long overdue, we cannot quantify the loss, but I am very happy because there will be no more loss and cries with government’s intervention.

Meanwhile, Zarma, in the company of Mr Olusegun Adekunle, Permanent Secretary, General Services Office, Office of the Secretary to the Government of the Federation (OSGF) and Sen. Abdulfatai Buhari performed the official handing over.

Zarma noted that the project was executed through the Ecological Fund Office, OSGF and was one of the 18 first quarter Federal Government’s ecological intervention project across the six geo-political zones.

He said it was approved by the Federal Executive Council (FEC) in April 2017 and was fully completed in December 2017.

“The project is expected to check erosion and flooding challenges within the community. It will encourage and improve health status, economic activities and the general well being of community dwellers.

“The handing over will offer the community the opportunity of taking ownership and ensure its security, maintenance and sustainability,’’ he said.

The minister also commended the contractor, Messrs Samchase Nigeria Ltd. for delivering the project on time.

He urged the residents to avoid filling the drain channels with debris that could lead to another flooding or erosion.

The minister also paid homage to HRH, Soun of Ogbomoso, Dr Oladunmi Oyewumi Ajagungbade III, who lauded the Federal Government on its commitment in ensuring development, especially in his locality.

The Soun of Ogbomoso also urged the Federal Government to complete the construction of 132 KV transformer located in Ogbomoso North Local Government Area.

The monarch said the construction was long overdue and should be fastened to improve power generation in the area. (NAN)