The Cultural Centre which used to be one of the precious cultural monuments in Calabar, Cross River, is in decay. 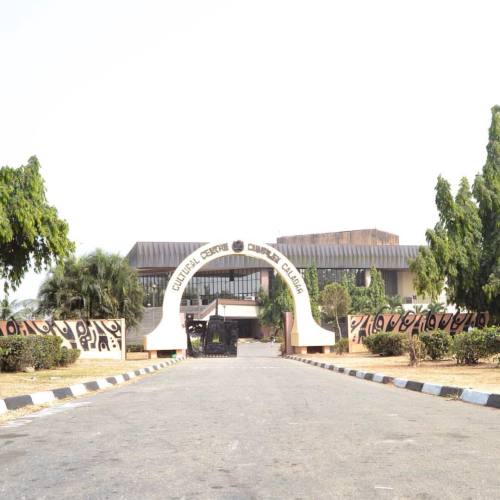 A check revealed that the main theatre which had hosted glamorous events had a broken stage, poor lighting and disjointed wire connection system due to years of neglect.

There were poor speakers, dead air conditioners and the leaking roof at various spots that left clear watermarks on the ceiling of the massive architectural masterpiece.

The Cross River Commissioner for Culture and Tourism, Mr. Eric Anderson, told NAN that the cultural centre was built to promote theatre and cultural activities in the state.

Anderson agreed that the structure was poorly maintained, noting that it was what they met when the present administration in the state took over three years ago.

“First of all, `Gold Mine’ actually administered the cultural centre for a couple of years before we came in and the contract expired on March 15, 2017.

“We took over the facility from `Gold Mine’ in a very poor state but from that time till now, we have tried to keep the place clean.

“If you talk of poor maintenance, I know I can quickly identify the broken stage with one or two leakages. These are capital intensive repair works but we intend to change the stage to a standard stage,’’ the commissioner said.

“We have taken over as a government, we are very attentive to know how the structure got this bad and we have started paying serious attention to the activities of those who rent the place.

“We also have to factor in our plan to renovate the centre; the demolition of parts of the centre which was used for the erection of Spa and left many of our dance troupes without a place for rehearsals.

“In terms of budgeting, the governor has approved the sum of N32 million for the fixing of the centre but if fixing it would cost 40 or 50 or N60 million, we would look at the needs that are pressing.

“Then subsequently, we can go back for more money,’’ he said.

The commissioner lauded Gov. Ben Ayade for early release of the theme of the 2018 Carnival titled: “Africanism’’.

Anderson said that this would enable the performers to have ample time to interpret the theme and break it down to sub-themes.

“One factor that makes every carnival different is the theme because your interpretation, costume, float, and outlook would change.

“Africanism for us this year is telling our own story to the international audience that we are black and proud.

“On the Carnival day proper, the Carnival Commission would have over 400 security personnel; not just for crowd control but as security against criminal activities.

“Some of these security officials would be in uniform but many more would be in muftis for effective surveillance,’’ he said.

The commissioner said that the `Mariner Resort’ which was one of the tourist sites in the state had been taken over by the state government due to poor management by the company it was concessioned to.

He said that the cinema in the resort was handled by a firm whose contract expired some time ago.

“The Tourism Bureau headed by Mr. Clement Omena got another vendor to run the cinema and is functional as we speak.

“The issue of sealing off the Mariner Resort by the Federal Inland Revenue Service (FIRS) has nothing to do with the state government because a firm, `Tandem’ ran the resort up till Aug. 1, 2018, when we opted out of the agreement.

“We were able to wade in quickly, talked to FIRS and the place was reopened after about four days. FIRS would find a way to get their money from the firm (Tandem),’’ he said.