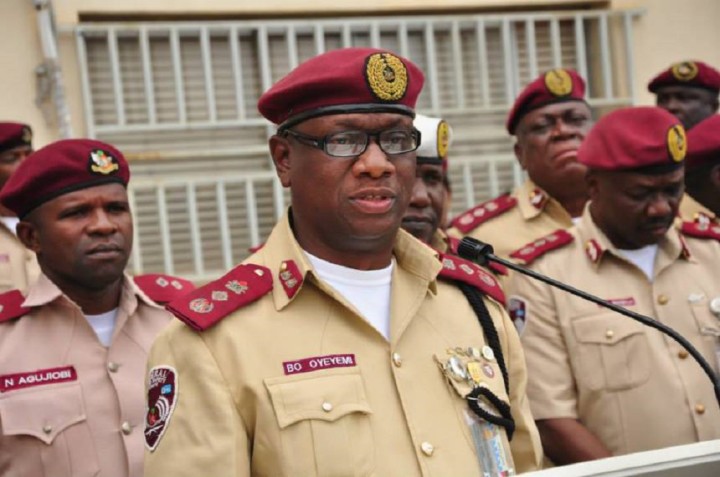 The Federal Road Safety Corps (FRSC) has approved the establishment of 30 road camps across the country along critical designated corridors.
The Corps Marshal, Mr Boboye Oyeyemi, disclosed this at the Fourth Quarter 2018 Strategy Session with 12 Zonal Commanding Officers and 37 Sector Commanders in Abuja on Tuesday.
The News Agency of Nigeria (NAN) reports that the session was the last in the year.
Oyeyemi said that the session would enable the corps strategise toward ensuring a successful Operation Zero Tolerance (End of Special Patrol Sessions).
He noted that FRSC had also activated all Road Side Clinics and the Emergency Rescue Ambulance Scheme.
Oyeyemi said that the Emergency First Respondents Scheme members across the country had also been mobilised.
He said that all commands were to work in close concert with the Federal Road Maintenance Agency (FERMA) and States Traffic Management Agencies, among others.
“Already, a total of 201 Mobile Courts have been put on notice to sit throughout the operation period, which is Dec. 15, to Jan. 15, 2019.
“In addition, motorists who commit life threatening offences will be referred for emotional and psychological evaluation test,” he said.
He further said that within the quarter, the corps commissioned three permanent Sector Command offices in Oyo, Ekiti and Kano, bringing the total to four out of eight newly constructed ones.
“Three others are on the last stage of procurement process and will be commissioned in early 2019,” he said.
He said that President Muhammadu Buhari had accented to the UN Convention on Road Traffic Signs and Signal of 1968, adding that the instrument of accession was deposited at the UN Treaty Office in October.
He urged members of the corps to ensure that the core values of the convention were brought to bear on the country.
Oyeyemi said that the corps had received FRSC Traffic Radio licence from the National Broadcasting Commission (NBC), saying that the radio station would be on air in the first quarter of 2019.
He further said that the FRSC Establishment Act was currently with the National Assembly undergoing the process of repeal and re-enactment.
The corps marshal explained that the purpose was to align the corps appropriately with best global practices such that can fulfill its responsibilities better for the benefit of humanity.
He urged Commanding Officers to take inventory of all corps logistics and communication facilities so as to ascertain their working order.
Oyeyemi, however, called on all road users to consider compliance to road traffic regulations sacrosanct, particularly as over 75 per cent of crashes resulted from human errors.
“The FRSC will not hesitate to invoke its powers to bring to book road users who will not willingly comport themselves in traffic.
“Compliance with road traffic regulations remains a compulsory civic obligation for which defiance will not be tolerated,” he said.