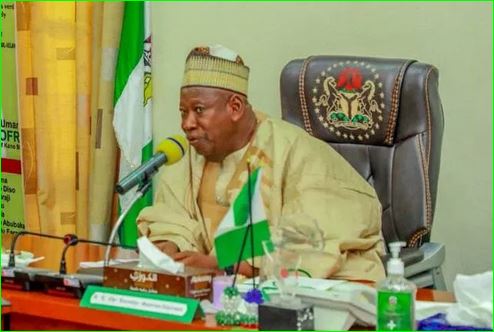 Henry SolomonAugust 16, 2020 9:15 pm 0
Kano State Government has revoked the contract for the construction of five kilometre dual carriage way in Dawakin Tofa town, Dawakin Tofa Local Government Area of the state.
The contract was awarded to Rocad Construction Company in 2012.
Malam Muhammad Garba, the state’s Commissioner of Information, disclosed this during a news conference at the end of the State Executive Council (SEC) meeting, on Sunday in Kano.‎
‎
Garba said the contract was terminated because the contracting firm had abandoned the project  midway, noting that the action exposed the residents of the area to hardship.‎
‎He added that the five kilometre road contract was re-awarded to ‎‎Messrs CCECC Nigeria Limited at the cost of N651 million.
The Commissioner disclosed that the state government also constituted a committee to assess the condition of all the five kilometre road projects in the 44 Local Government Areas (LGAs) of the state.
The measure, he said, was to allow for the evaluation, redesign, complete or terminate contract awarded for the projects.Garba said the committee would also determine the extent of the execution of the projects and payment to the contractors handling the projects.‎
He revealed that the committee would be headed by the Permanent Secretary, Ministry of Works while representatives of the state’s Urban Planning and Development Authority (KNUPDA) and Ministry for Local Government would served as members.
‎“The SEC approved N26 million and the augmentation of N15 million additional cost in the contract for the repair works of the dilapidated Bagauda Bridge on Wak-Tiga Road in Bebeji LGA of the state.
“The contract initially awarded to Messrs Bindigari Construction Limited in 2014, at the cost of N11 million, which scope includes reclamation of eroded sections, provision of retaining wall at both wings, among others was not fully completed.“The council also approved the reactivation of the state government’s initiative on mini vans empowerment programme tagged: “Kano Kal-Kal,” designed to enhance economic empowerment of the womenfolk, to achieve sustainable clean environment in the state.“Under a new approach, the programme would identify genuine cooperative women groups to be given the mini vans, as part of the administration’s women empowerment initiative,” he said.Garba said the council equally approved the release of N20 million for the renovation of four women development centres in the four new Emirate Councils in the state.He added that the council  had also received a proposal from the management of Porto Golf Group of Companies for the establishment of Porto Golf Resort at Tiga Castle Rock Hotel in Bebeji.
Garba further said the council also received another proposal from a private developer to use the old Triumph Publishing Company complex for the construction of a specialised Bureau De Change (BDC) market.‎He said the move would encourage investment and drive economic activities to create employment opportunities and boost state revenue base.
“The ultimate objective is to re-assert Kano as one of the leading economic centres in the country.”
(NAN)