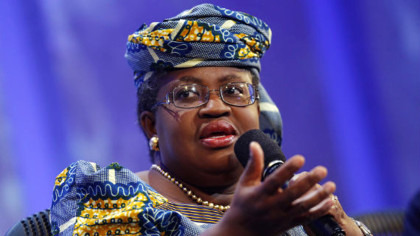 Nigeria will have to adjust to oil prices heading lower for some time to come, Finance Minister Ngozi Okonjo-Iweala said on Thursday in an interview in which she also cut the outlook for economic growth next year.

Africa’s largest economy relies on oil exports for 70 percent of government revenues and has been hit hard as crude prices have fallen to four-year lows below $80 a barrel after trading above $115 as recently as June. [O/R]

Asked if she thought the 30 percent drop in crude prices since June might prove temporary, Okonjo-Iweala said Nigeria needed to adjust to lower levels for good.

“We will have to take the necessary measures and we have already started to do that.”

She pointed to plans to increase taxes on luxury items and to ban non-essential government travel as first steps, adding that she was also working on plugging tax holes overall.

Further down the line, there is more potential to raise revenues through taxation if required, she said.

“We have the lowest VAT in the world at 5 percent, so we have a lot of room to manoeuvre,” she said, adding there were currently no plans to raise value-added tax in the works.

Nigeria has been hard hit on several fronts.

Along with a worsening domestic picture – attacks by Boko Haram Islamist militants are almost a daily occurrence – the oil price collapse has fuelled a 20 percent plunge in the local stock market since the start of the year.

Looking ahead to economic growth rates next year, Okonjo-Iweala trimmed her outlook to around 6 percent for 2015, down from a forecast of 6.75 percent she made in October.

The recent turmoil has also weighed heavily on the naira. It has lost almost 10 percent against the dollar since the start of the year and hit fresh record lows on Thursday, despite repeated central bank interventions that have depleted Nigeria’s foreign exchange reserves.

Okonjo-Iweala acknowledged the pressure on the naira from falling oil prices and said she expected the central bank would take action at its monetary policy meeting next week, though she gave no indication of what she expected to see.

“I can tell you that we have got the tools with which to manage this,” she said. “You will see the central bank taking the appropriate monetary policy steps to assure we have a soft and not a hard landing.”

Asked about borrowing plans for next year, she said Nigeria had no plans to return to the Eurobond market but was looking at tapping into the country’s large diaspora.